The risk we saw coming into the market yesterday carried through to today and the dollar index continued to take a beating early on, though certainly not as hard as just hours ago.

Some quick points into the US session:

AUD/USD went back up above parity, now facing the 1.0024-38 range resistance. Levels all the way up to 1.0094 with the “Quasi” coming in right at the current range (1.000) – it is struggling to get through it now but these are essentially the close/major reference levels worth noting.

GBP/USD punched through/traded above its daily supply line, but just barely. It is currently retesting back through it and a large open spike from yesterday remains (down to the 1.5755 area, appx.), despite slightly better than expected CPI (3.3 vs 3.2, core 2.7 vs. 2.7 in-line) numbers getting released earlier today. These “about flat” numbers are rarely any catalyst for strong upside movements, and the “priced in” factor comes into the play (the old buy the rumor, sell the news). EUR/GBP buyers are certainly adding to this pressure following a retest of of it's own demand line at yesterday's 0.8347 low, and support from ZEW data.

NZD/USD is taking back yesterday's range today after the delayed move following worse-than-expected retail sales numbers (-2.5% vs. -0.8%). Intermediate upside target rests around .7585-89, and is the number to beat for a higher move. Its demand line, however, is under heavy attack and has been “wedging up” quite nicely lately.

Bigger news from yesterday concentrated on Moody's commenting on the potential downgrade of the United States, should the Bush-era tax plan be continued in the manner in which it was proposed by the Obama administration. The U.S. Senate voted to end Senate debate on the issue and it now must pass through the final approval stages. It would also extend unemployment benefits for 13 months, cut payroll tax by 2% for a year and continue a series of other tax breaks, among ticking off handfuls of Democrats because it had something, anything to do with Bush.

The ECB continued it purchase of bonds, approximately 2.7 Billion worth, sliding over through last week's settlement activity and adding a bit of flare to their purchasing plan. In what seems to be their now primary mode of attack, the ECB has been leveraging out. Trechet's call for “maximum flexibility and maximum capacity, quantitatively and qualitatively“, can of course only lead us to assume that more is on the way. FYI paying off your credit cards with other credit cards typically isn't the way to go, folks, so please don't use the “but Trechet/the Fed said…” excuse. Either way, traders dig proactive nations, and EUR got some air on the hype.

Finally, a shine of light just released from the US moments ago – Retail Sales (core 1.2% vs. 0.7% or 0.8% vs. 0.6%) and PPI (0.8% vs. 0.6%) slowing down trading into the higher yields. EUR find itself in a bit of a data sandwich. Yesterday's accelerated movements caught some attention and we're currently getting the after effects/pressure of the wave.
FOMC statement at 2:15 EST stay tuned…. 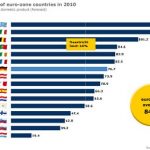 The Euro Crisis In NumbersForex and Futures Commentary