Imagine having a trading system that could handle markets that trade up, down, sideways, or in the most volatile or non-volatile conditions. While many gurus would proclaim that their strategy will do just that, common sense and simple statistics dictate that this is truly a rare event, if it ever happens at all. Consistency over extended periods of time is indeed the most challenging aspect to trading and those that accomplish it go down in history as “legendary” traders that have uncanny abilities to forecast price and adjust their risk models at the appropriate times.

Losing money in this market is a more common event. Greed overruling logic is perhaps a more common thread in today’s society when it comes to this kind of quick decision making. While I hate to make analogies to gambling when it comes to investment, perhaps no where else can these basic psychological impulses be witnessed to a greater degree than on the floor of a casino. Impulses and quick decision making based on greed are seen everywhere, repeated over and over again on any given day. With the “house” having the upper advantage, people still don’t seem to care, and the rush of a single win seems to override several, if not all, losses accumulated throughout one’s visit.

On what was to be a non-event weekend, I took a break from the norm and decided to head out with a friend of mine (he's also a trader, but for a bank based here in NY) down to Atlantic City. Atlantic City is known as the Las Vegas of the East and is basically swarming with casinos. We settled on one of the newer ones and went in with some “donation” money intended for the casino, and not a lot at that. Personally, I hate the idea of gambling…..every experience I have had I think I'm going in with a hundred bucks to “have fun” and no matter how much “fun” I have at the casino, I'm leaving ticked off because I lost some hard-earned money on odds I knew were silly in the first place, so now I don't even bother.

But my friend, well, he went in with another strategy. We sat down at a roulette table, and he started to play. In the game of roulette you can bet all over the board and if your number hits, the payout is 35:1, but you usually have to risk quite a bit just to get to that point in the first place. We sat at a table that had a minimum of a $10 bet, so that's all he risked every single time, and he always bet on the same portion of the board. It would mean that he would have to win one out of every three spins just to come out ahead by a little, still holding onto the risk of an ugly losing streak wiping him out. But he played, and played, and played, until three hours went by and he still sat there a little over breakeven.

While we sat and played, people came, and people went. In our three hours sitting at that table, there were roughly 20 or more people that came by and actually played. Out of the twenty, only 2 people made money. They came, they played, went on a rapid winning streak and left before their odds changed. The longest one of these people stayed was approximately 20 minutes. But the other 18 were part of another breed altogether. They came, they won, and they bet more, and more, and more, until everything they had put down initially was wiped into the hole on the table.

While my friend's conservative approach wasn’t exactly a clear path to unbelievable profits, he stayed alive and walked away without losing a dime. But for all of the other methods being used while we sat, one common thread existed and that was the simple impulse to keep on betting and turn their small amount into a fortune in a matter of minutes. Of these people,

• One man put $500 on “20 black” three times in a row before walking away and losing it all
• Another man bet one thousand dollars across the table two times before he lowered his risk and started to win. He made back about half, and walked away
• One woman, who at first I thought “had it” bet one hundred dollars across the board as my friend did, won several times, and then doubled her betting size. The pyramid collapsed and she lost her initial one hundred dollars, so she put down another. With the same double size, she went on a losing streak and lost that, as well.
• One man kept trying to ‘fade the trend’ of black numbers getting hit, betting on red. After three consecutive black numbers got hit, he started to place his bets. The trend continued for approximately 5 more spins until the man walked away losing over one thousand dollars from doubling up after every loss. He walked away and naturally, the next spin landed on a red number.

…..and so on and so forth. Of course, the first thing that came to my mind was: “Are these people insane?” But it wasn't just one person, or two people, that seemed to do absurd things. It was about 90% of them. And while you sit and read and say to yourself “tell me something I didn't know”, how in the world could this many people do so many foolish things and yet we get shocked when we read that about the same statistic of traders lose money?

So is it really poor strategy or just a complete lack of common sense? While everyone hunts the internet and books for the next “no lose”, killer trading strategy how many of them are just exercising poor judgement and triggering their greed impulse at every chance they have?

We're not talking about and edge, or the fact that you can have more tools in trading under proper methods, or anything of that matter. We're talking about pure psychological impulses that start with good intentions but show reality in a completely different light. You can see these examples all over the place and this is no different.
Call me naive or whatever other terms you might want to use, but rarely do I sit with other traders and watch them clean out their trading accounts on overleverage or completely miscalculated trades. On the casino floor you can easily witness people doing simply nutty things, however, and in just about every second you are there.

About a couple weeks ago, I posted an article regarding trader performance, and measuring your own versus the industry. When you look at those numbers from a comparative standpoint, the performance looks weak, but its a simple, base reality. Big or small, we are all humans, and I have seen $50mm wiped out on one book just as easily as I see novice traders “going for the gold” and ending up in the dumpster.

One thing that we discuss over and over again here is risk management, and how position sizing and sticking to a system will keep you ahead of the pack and that simple logic overrules all. People can't stomach drawdown, and one horrible event leads to another under overleveraged circumstances. When I went to a recent workshop and spoke to the crowd, telling them that I only risk about 0.25% per trade, I didn't get the reaction I thought I would. People seemed to be surprised more than anything, but I think it can be linked back to everything we read out there from self-proclaimed gurus telling you that 5% per trade is “moderate” risk. Moderate for who, I wonder, suicide victims?

No matter how you interpret this information, for myself, it was a bit of a wake up call. As I pour through the pages of blogs, research materials from brokers, forums, etc. all dedicated to trading, you have to wonder how many of these people can actually sit down in front of a machine and maintain some very basic discipline that is actually going to help them and not destroy them.

While it would be nice to have the perks of a casino in front of me while I trade: give me free drinks while I draw support and resistance levels, comp. me a penthouse hotel room when I go on a winning streak, offer me a glamorous magic show after I'm done, or decorate my office with lights and a 50-foot billboard of Carrot Top, we are talking about two very different environments. Regardless, humans are humans and the psychological impulses are all still very much the same. Maintaining disciple and simplicity when it comes to position and money management are actually not that hard to achieve when you don't think it's such a big deal. Learning the hard way isn't much fun, so if you haven't started yet, you mine as well get going. 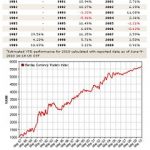 Your Performance vs. the Industry: Comparing FX TradersTrading Routine and Psychology 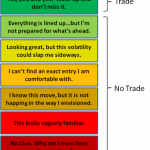 A Blind Man Drives A Car…Trading Routine and Psychology