I rarely do any kind of recent market commentary these days because I would never be able to keep up with it. I've been in this business for a good amount of time now. I was active during the last recession and I'll be blunt: that is the last time I have seen trading like this (or at least my mind wants me to believe).

It's the headline cascade. One bad thing after another hits the wires, and price shoots down another percent, or two, or four. My intent here is not to say we are back in 2008 economically, because we are most certainly not. I'm talking about the price action in relation to how things are developing in the news. My focus has always been looking underneath the hood of price – its liquidity, who is buying and selling where, when, and through what means. And so this is the lens through which I am writing here.

Wall Street's primary concern should be economics. But when Amazon's price to book is over 15, or Tesla over 18, it's very easy to argue that this is not always the case (big shocker here).

I do also believe that headlines are exacerbated even moreso now versus then due to increased toxicity in politics. Sensitive subjects are also the easiest subjects to leverage when you are attempting to turn the opinion of a crowd. Many journalists have become more shamelessly biased than I can ever recall. This adds fuel to the fire. For what it's worth, Wall Street does a decent job of self-regulating the nonsense that eventually ends up on click hungry websites.

What is happening lately is a wake up call to the potential economic impacts of this virus. Throughout the week, a series of headlines hit, all explaining one major thing: it is coming to the US, and will have further economic impacts right here on our own soil. It usually starts with retail sales and trickles its way down the economic food chain.

The market is seesawing dramatically and with exceptionally poor price-by-price liquidity, large swings will all the more common. One false step is all it takes and its why I recommend sidelines for the vast majority of you reading this.  This site has historically attracted a short term crowd which is why I write any of this here.

I sorted these out by Z-Score so you can get an idea for the volatility vs. what everyone is used to (high school refresher: z-score=1 standard deviation). The US ranks #1 here out of most major developed nation ETFs, hence the reason everyone is flipping out even more. This is not even close to what we are used to from a volatility perspective. Many option traders are, in a nutshell, describing things as “off the charts”. And so especially if you plan on trading intraday or over the course of a few days, there are extremely low odds that you've ever experienced anything like this before. These are yesterday's numbers. 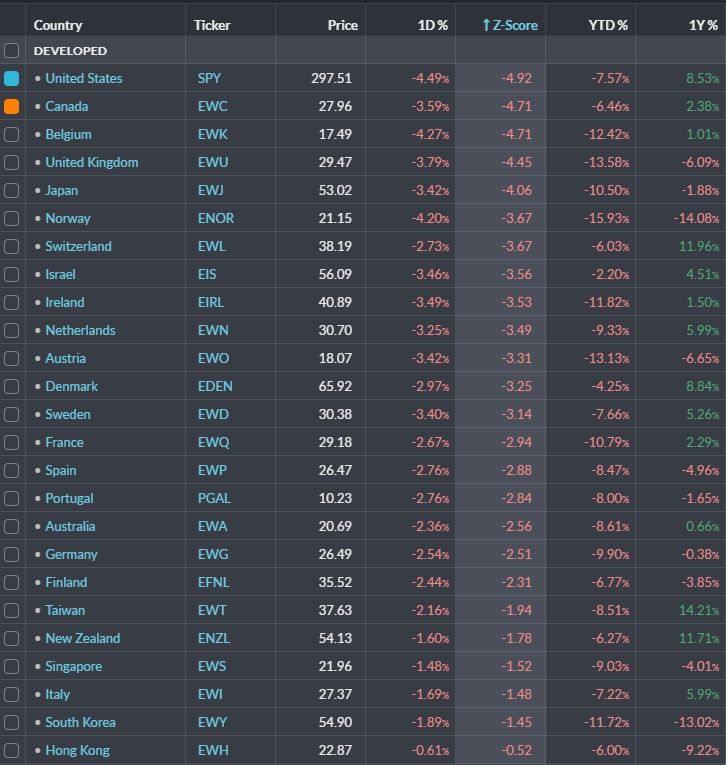 I monitor major volume nodes in order to gain perspective on many different things, but mostly locations. When markets get illiquid, they go on the hunt for liquidity. Beyond theory, when prices range, traded volumes accumulate and on revisits back to those zones, liquidity is present yet again. It is one of the reasons why major areas of previously executed volumes (or large amounts of open interest) regularly attract price. The liquidity is there. Executions once impossible, are far more likely to be so in locations such as these.

Nobody likes to trade in a hurricane, and this is why limit orders get removed from the market in masse when major events are underway. This is what's happening lately. Without anything to slow them down, at-the-market executions move prices relatively easily.

People regularly confuse lots of traded volume with price-by-price liquidity, but these two things are very different. Liquidity is literally just resting orders waiting to be executed….that's all. Volumes are just that – finalized executions. Time is a factor here. Without adequate time to adjust for large price swings, liquidity becomes far more dispersed. It is a chain reaction that takes time to normalize.

This is a snapshot of executions from 11:43am EST. These are just ES futures. To say these are weak on a price by price basis is an understatement. On the left side of each bar is the Bid x Offer. On the right, net executions to buy or sell. Bottom line, it is taking very, very little to move this market one tick at a time. 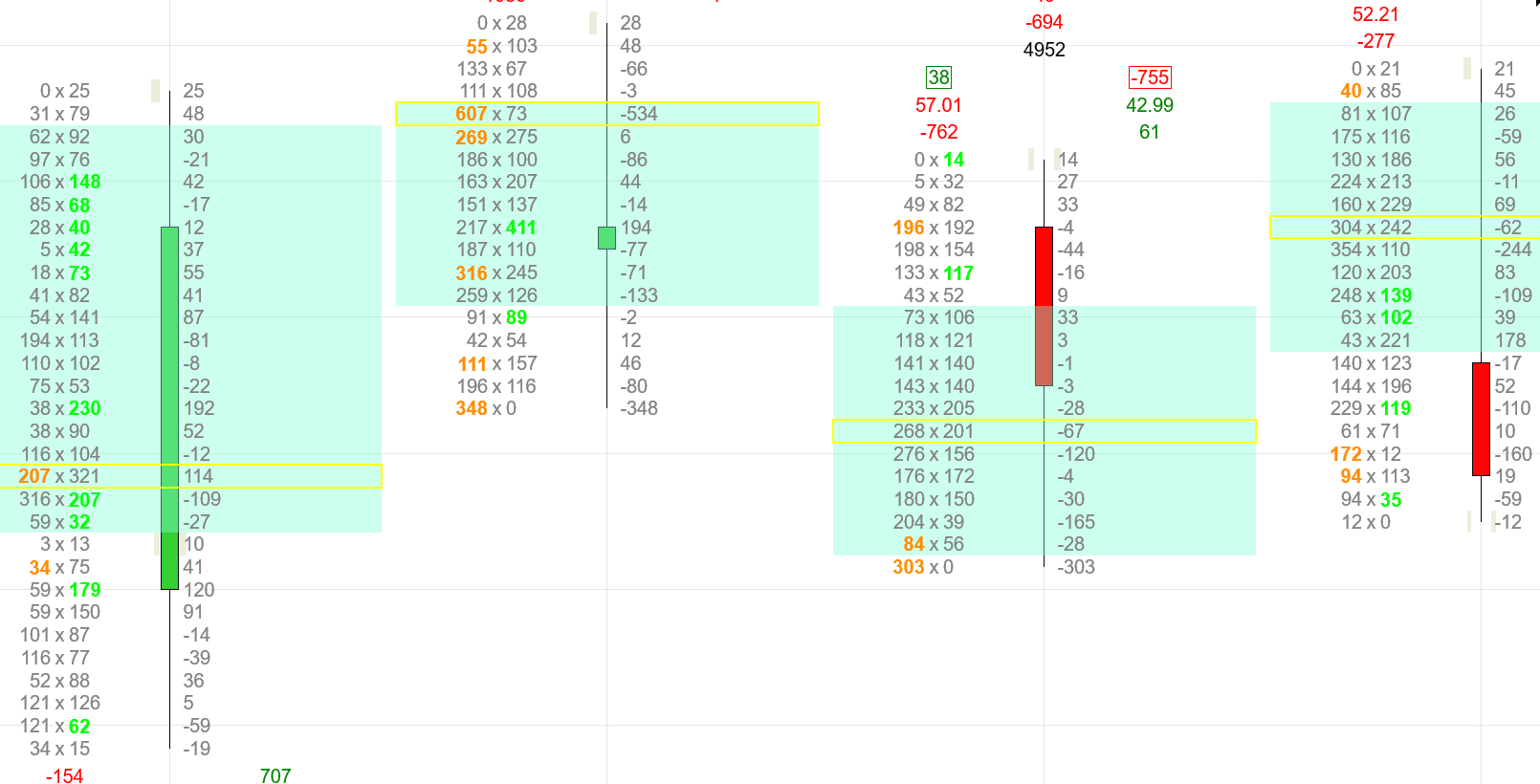 Additionally, markets go down faster than they go up. Whereas dollar cost averaging over time is the norm, selling is typically done in one shot.

Today, we hit the POC of this entire upper leg going back to 2017, or just the last time prices were up here. Chop is likely the next thing usual course of action, and these will be large swings. It is going to take time for things to get back to normal, explained above, although at the present it appears we are looking at a new normal. Red lines on this chart on there only to display where the largest chunks of volume have been traded over time.

-Large, illiquid upwards movements are not uncommon in situations such as this. This is not necessarily a sign that things are outright reversing. It is just a lack of liquidity. We had a ton of late session buying coming in today, seemingly out of no where. $100 in the afternoon alone.

-Liquidity will not return to normal anytime soon. It will not take much to punch prices much higher or lower, in a minimal amount of time.

-Node edges will deflect prices as usual. Monitor rejections of opposing nodes to gauge the future direction of the movements (price “jumps” from node to node on a regular basis).

-Don't be a hero. Large swings are carrots on a stick for newer traders/investors. Lucky once does not equal lucky again if you are a novice.

I see both sides of this story getting discussed online (a lot): the bearish, stock market total crash camp, and the bullish, “get everything at a discount” camp. Just do what you do best and manage your risk. People love to talk. I'm writing this from the angle of “wow, I haven't seen this in many years” when looking at executions. So just tread carefully. Thanks all.

5/5 (53)
Virus Headline Impacts on Liquidity, Volatility and Locations2020-02-282020-02-28https://paracurve.com/wp-content/uploads/2017/03/ParaT50Blk.pngParaCurvehttps://paracurve.com/wp-content/uploads/2020/02/spx-poc-228.png200px200px
About
Steve W.
Since 2008, ParaCurve (formerly NBT) has been a provider of a wide range of articles geared towards a common sense approach to trading using fundamental market analysis in conjunction with globally identifiable technical levels. Steve is a 17 year trader, having formerly worked as a sell and buy side global macro analyst for several of the largest financial institutions in the world. You can follow us on Twitter or Facebook. Series and support at FXS Analytics.
Showing 2 comments 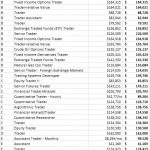 A List of Prop Trading Salaries: How Much Money You Can Expect to MakeForex and Futures Commentary

Funded Trader Platforms: A (Seriously) Objective Dive Into How They Work (No Affiliate Links)Forex and Futures Commentary