Crypto currencies have been on my radar lately. Not because I like getting smoked in illiquid markets, but because creative, alternative uses for them have skyrocketed in the past 3 years, and I just really enjoy seeing what's possible. As time has passed the merger between other OTC markets (like foreign exchange) and crypto currencies have become more pronounced.

I want to start off by saying that the following IS NOT an endorsement. I just find it interesting, and though I would write about. That's it.

The use of many of these currencies are outright illegal is some countries.  But for now, here in the US, they are still legal, and taxed as property / capital gains.

So do you live in the U.S., want 500:1 leverage, the ability to hedge and all the other stuff that “cool” countries get to do (except those that outlaw Bitcoin…they're not cool)?

During “couch time” at night, I look around. There are no shortages of Bitcoin exchanges, nor alternative ways of investing your bitcoins, across a very broad spectrum.

Crypto currencies are of course different because your funds aren't being held at a bank. They're in a multi-layered wallet, which of course is till prone to risk. But the things you can do with crypto currencies, well, that's another story.

When you mash Wall Street and Silicon Valley together, interesting things are going to happen.

Free as a Bird, But Keep Your Socks On

BTC-e is one example of an exchange that allows you to open an account, download MT4, and start banging away on buy or sell buttons to heart's content at 500x leverage. Their model is an older one, but still, it represents the merger of what we are used to vs. what's happening now.

Many other exchanges have responded to the demand of customers and now offer full-blown trading platforms, as I'm sure I don't need to tell many of you.

A popular, Hong Kong based company called Whaleclub caught my attention last night. They, like any other exchange, offers the trading of crypto currencies, but so much more. In seconds, I opened a real account with nothing more than an email address, allowing me to trade major instruments like EUR/USD, Crude Oil CFDs, Gold, etc. at 200X leverage, hedging, you name it, all funded by bitcoin.

All the U.S. laws set in place since 2009 meant absolutely nothing here / right out the window. You're free as a bird. 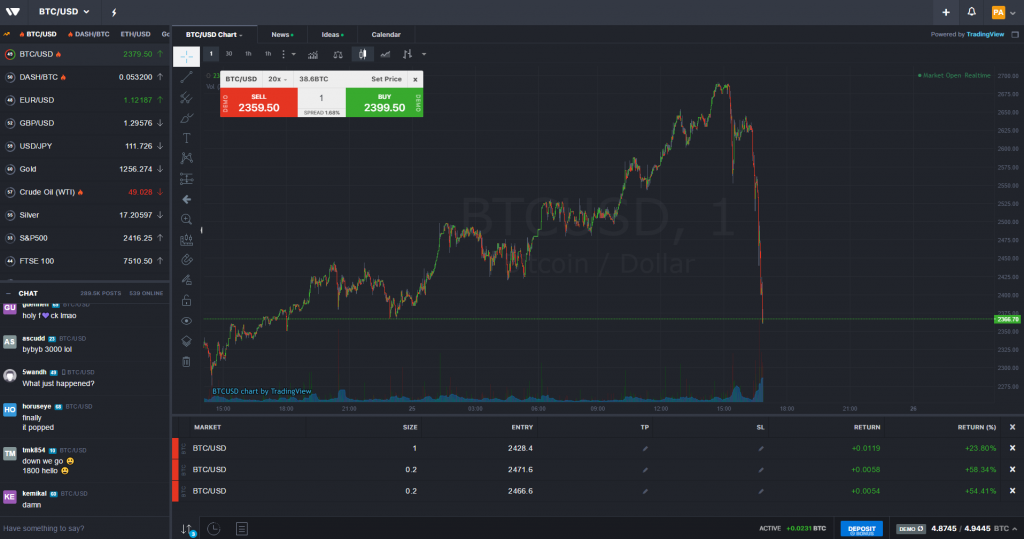 According to an article on Finance Magnates, WhaleClub transfers risk by obtaining liquidity from a number of external sources, with a good number of trades being matched internally. Bitcons are held in cold storage.

Needless to say, I felt old because this was the first time I had come across anything like this before.

To those of you outside the U.S., this is no big deal. But to us, this is definitely news.

I'm unsure if I even need to get into the regulatory aspects of what's going to happen here. We live in a free country, but with major caveats. I would be lying if I said that our financial regulators didn't, at many times, essentially treat retail investors as children, but that's a entirely other topic. If you have the cash, then you're off the hook, as with anything else.

Time to Sound Like an Old Man: The Risks

I'm not going to start some stuck-in-my-ways, old fogey rant about value, etc., things aren't the same, blah blah. I generally don't do well with people who have closed minds or selected appreciation for change. In my opinion, this is all very cool and I look forward to seeing what the future brings.

That being said, there's still risk. And those who don't understand something see greater risks than those who do.

Foreign Exchange is a prime example of an unregulated market that has proven itself of doing a very good job of regulating itself. Despite what happens off-market (sales and execution fraud), the market itself is generally well-balanced. Obviously, you're going to have those risks in this market (and likely more) as well.

The biggest risk at this point, from my perspective, is a technological one. I opened dummy accounts at 3 different exchanges / brokers, and at all 3, I experienced lag, total lack of execution or other issues that framed them as a disaster, in my opinion. That's the larger issue for someone like me.

The other larger risk is where you “deposit” you bitcoin. Every single one of these places has a bullseye on them for hackers, and one of the leading competitive standpoints is how these funds are held, at these places, if they're even held at all.

And don't forget your currency risk. If you're buying a crypto outright to turn a profit, that's one thing. But if you're using it to do other things, hedging with your base currency is going to need to be on your agenda.

There is zero question that cryptos will continue to become more mainstream. The guys leading the charge typically share a lot in common with someone like myself, but with other agendas. Attempts have already been made for a Bitcoin ETF here in the US (and we now have the BitCoin Investment Trust OTCMKTS:GBTC), and this type of activity in no way is going to stop. And like anything else that rises in popularity, regulators will step in and start applying rules, as they always do.

So for now, we have yet another wild west on our hands, this one looking very different than the last. 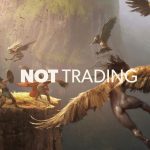 Why a Swing Trading, “Hands-Behind-Your-Back Strategy” Never Worked for MeTrading Routine and Psychology 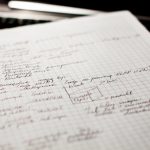 My Notes, and Changing the Perceptions of Novice TradersTrading Routine and Psychology