What a show today.

It is days like these that I am completely reminded of the humility one needs to do this kind of job day in and day out. And it is also a reason I am happy to not to take longer term positions in a market that is starting to resemble a rodeo…..clowns included.

One of the bigger pieces of news today (I'll get to the rest) was of course the unbelievable removal of the 1.2000 intervention floor on EUR/CHF, which hasn't budged in roughly 4 years. Tack on a -.75% interest rate and you have yourself a call to action for chaos.

Now try to forget about the interest rate for a second….the intervention floor was removed. Because as low as the Swiss wanted to put that rate, and while even going into negative territory, nothing mattered so long as that 1.2000 EUR/CHF floor remained intact.

Today, the SNB's action was the equivalent of letting a sheep walk in front of a pen of 5,000 wolves that haven't eaten in a few months, and then unlocking the gate. And so this floor gone for the time being, taking billions of dollars with her. I am debating which chart I want to frame and put on my office wall to keep me humble. This one, or USD/RUB several weeks back. 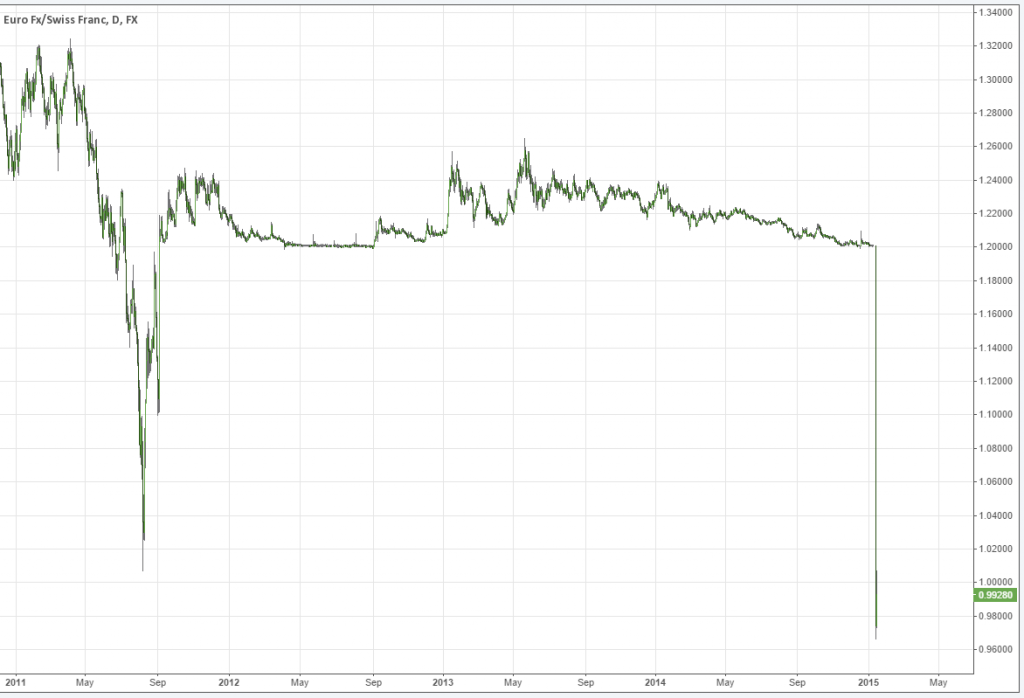 EUR/USD cannot keep its head above water for the simple reason that EUR/CHF is getting absolutely obliterated. So for whatever “long signals” or “value” you may see in EUR/USD for the time being, you may want to second guess. Spreads are huge and until the aftershocks of today's roll come to an end, I say  find something else that has much higher probabilities. Because even if you think that “the short” is in full effect and completely on, rest assured it does not take much for this to get completely ugly. The bottom line is that this is not a market being dictated by traditional authority. Personally, my commodity trading is going to get a boost in the upcoming week, I imagine.

As I type, we have just crossed the 1.000 EUR/CHF handle, with EBS pointing out a low of .085 earlier in the day. Bloodbath on the both the institutional and retail front. Mayhem on trading floors. Scores of mean reverting strategies were crushed to death (here's one on Zulu …. down 23,633.7 pips as of this writing, or aka margin call and thensome), and small retail broker got pushed out of business. So don't get too comfortable, needless to say. And this is just the beginning. With the number of buy/sell side shops out there I am highly certain that more than 1 will be going out of business after today.

I literally haven't traded EUR/CHF since 2011. My last trade was a winner (I remember because I had to call the trading desk to close it – the market was so volatile that the feeds weren't even close to stable), making up for about half of a loss I suffered on the way down to the lows, which have just been broken. This was my lesson in trading something that was completely unlike I, nor anyone else, had ever seen before. So never again for yours truly.

There is nothing technical to write about this pair for the time being. Nothing. Its a rodeo. One which is way, way bigger than you or I.

Skipping back to EUR/USD. While I am willing to be patient for the time being I wanted to note a couple of very interesting things from a longer-term technical standpoint. In essence, it has been very respective of longer-term levels. First, the daily chart: 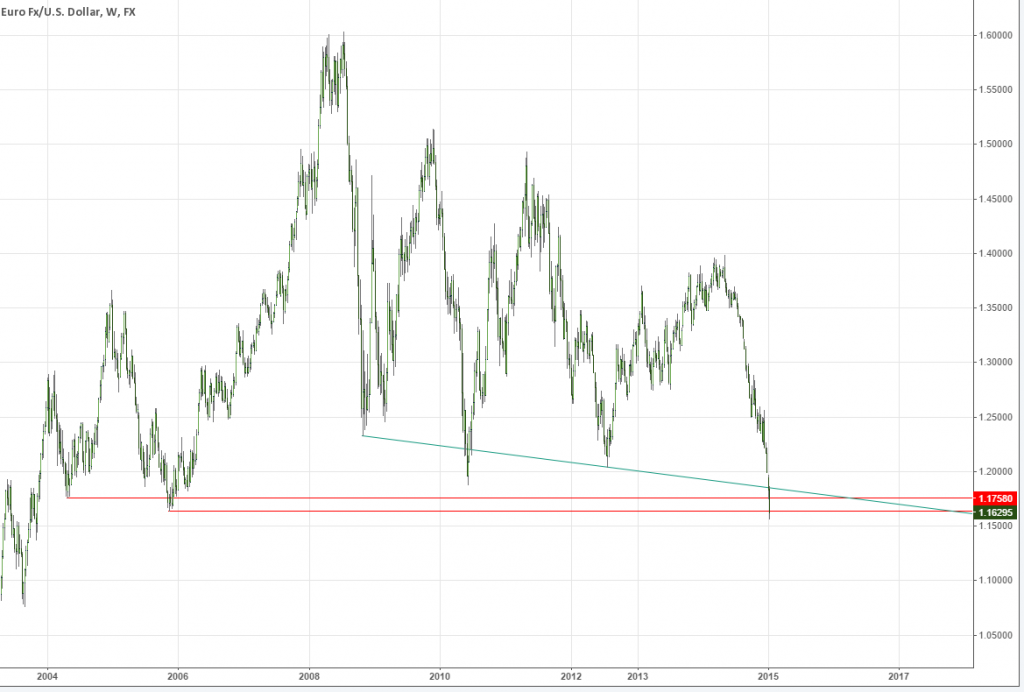 And here is what all of this looks like on an hourly chart. No comments needed. 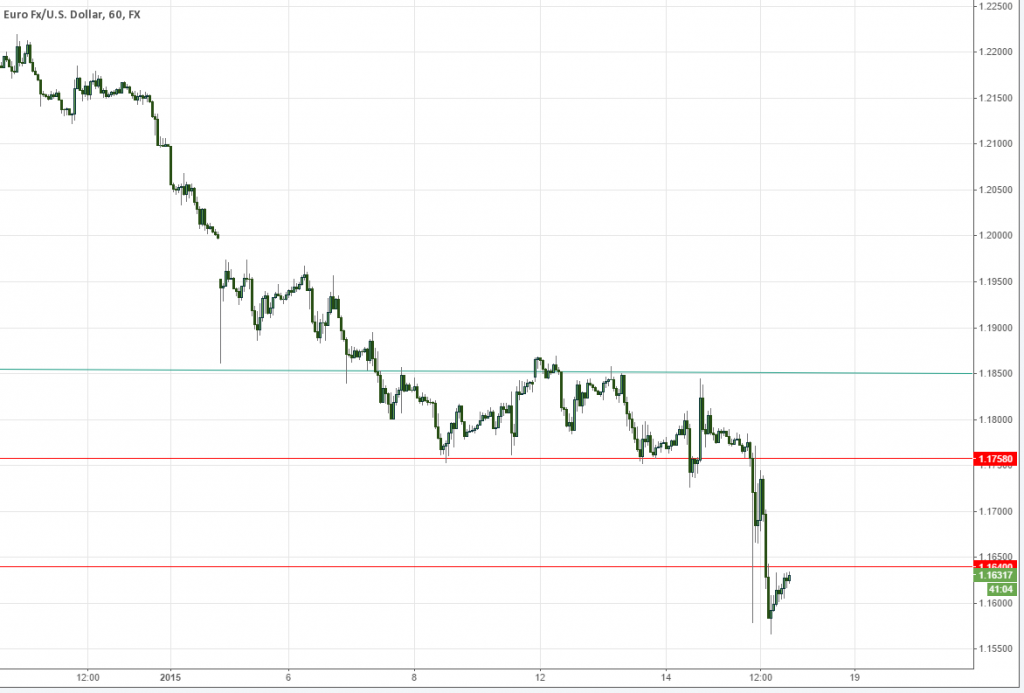 And we move onto oil.

After a monster run to the low 51's, here we rest in the low 46's following a sharp V reversal. Crude got punished far worse than Natural Gas did today(-4.66% vs. -1.38%), which eventually recovered following a nasty movement lower. These two instruments are tied to very different fundamentals but do indeed share a roughly correlated stance. Oil is nothing more than shell shocked as far as I see at these levels and likely to start chopping up.

Gas, I am less certain. We are stuck in the middle of today's range and the initial instinct is to follow the last movement (lower) for day trading purposes. I am flat / no overnights today and seeing what the runs bring tomorrow. We saw some highly technical movements today that actually made for some very good trading. Once again, I will save my breath here, and marked everything up on the chart below: 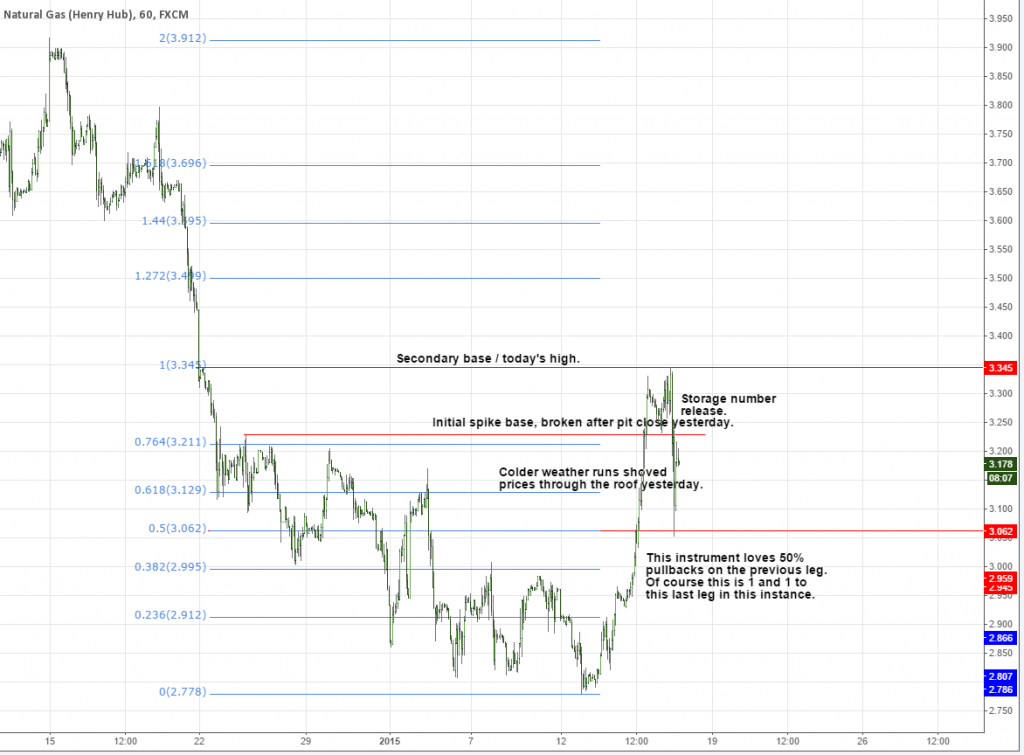 Following up to my last post, which was looking for a deeper dip, the S&P500 is playing catch up with the rest of the world. Risk is far from “on” at the time being and while slight economic growth may be seen at all, the trend is down. Throw interest rate speculation into the pile, very low oil, and we have ourselves and unenthusiastic group of major investors. I would expect to drift into a downward-sloping channel at this point (think flag).

I also mentioned in that last post that the first couple weeks in January, if bears are to be seen, tend to come out. Well, here they are, roughly 70 points later, and here we rest. No doomsday yet, however. One step at a time. We are at an area that likes to shake out weak participants (bears seeking to latch onto a trend), but also a very heated macro environment. One nullifies the other and so I prefer to see more concrete movements.

Yesterday was a hammer aka “pin” bar in a downtrend, at a weak inflection point. These tend to get obliterated in such, as this one did. Typically, this is a stronger signal to continue the trend than the initial hammer itself, so no change in bias at the moment. 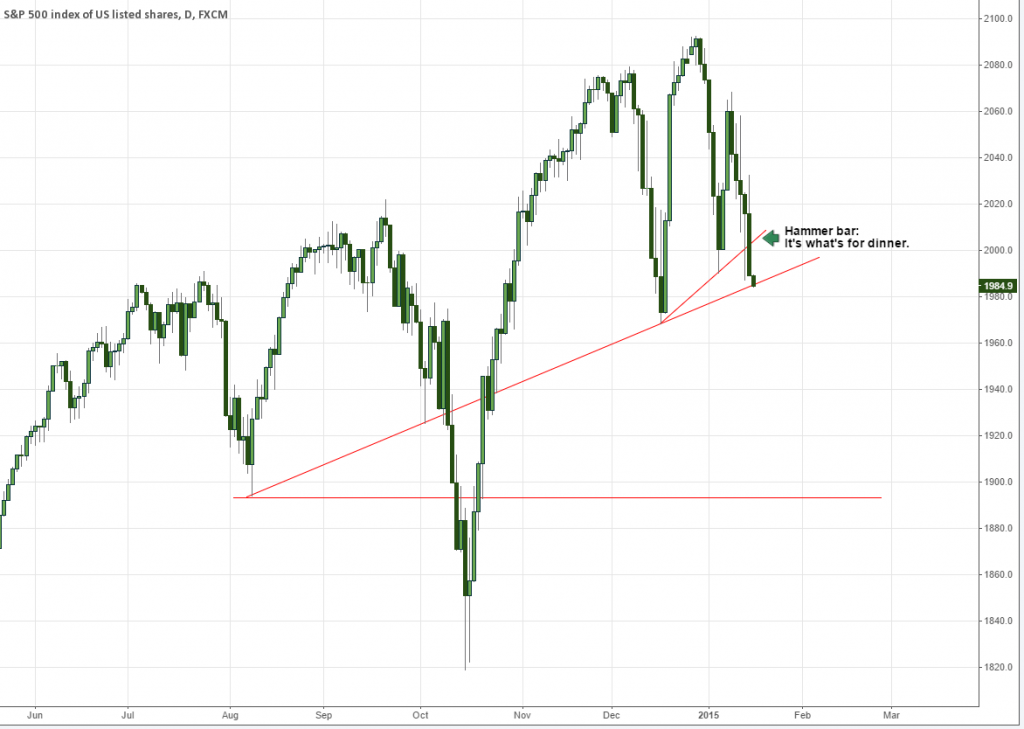 And so we rest for the day.

As usual, take the easy ones, and don't do anything else in the meantime. Until next time. 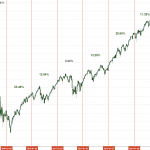 SPX: 6 Years of Money In The Bag and a Pile of Doomsday TheoriesForex and Futures Commentary 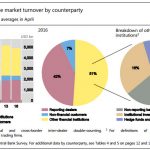