I have had some pretty good success this past week selling into this EUR/USD move and thought I would write about a few encouraging things that happened along the path. Euro pairs have been running, and running well, and so daytrading takes a back seat for a longer term play that doesn't exactly happen everyday (but probably more often than you think).

Trend trading can turn into a quick disaster for most people because there is no doubt (in the case of major currency pairs) that the market fades more than it tends to run. But when you have the kind of stimulus like we did last Thursday, there is only one thing you ever need to do: sell. The market does not pull back on unidirectional interest rate announcements that come out of the blue. It never has and likely never will.

Rates can be a blessing or a curse

For a long time, I had a post-it note attached to one of my monitors that read “Don't screw with rates”. The word “screw” (because there is no time for eloquence) was my way of saying “fade”. If you fade an announcement like this, you metaphorically die in the currency trading world.

One of the worst hits I have ever taken followed an announcement that I did not understand at the time, and boiled down to rates. You never forget these. The market was fast, and I my regularly scheduled stop loss wasn't set. When the push lower came, I wasn't prepared with half the tools I am today, and so I need not say what happened next.

There are a couple articles posted on this site now that refer to a range of trend trading tactics. I wrote them mainly in reference to your “standard” currency trend, and there is no doubt that this kind of trend differs greatly from your standard variety. This is the main article I am referring to. So is the strategy all that much different in this case? The quick answer is no, not particularly. You just need to know what you're dealing with from a fundamental perspective.

Anyone that “questions” whether or not EUR/USD would collapse the way that it did following this announcement should not be trading with any kind of real money in my opinion. This is 101 stuff in my book, though you will probably not read it in most others. Here is the EB summary via Ransquawk:

ECB SUMMARY: Draghi's unexpected bomb shell that the governing council is comfortable with acting next time resulted in a sharp reversal in EUR/USD and bull flattening of the Euribor curve, on speculation of easing of policy in June…

– Specifically, having failed to break the key 1.4000 level (touted barrier level) to the upside earlier on, as Draghi tried to avoid answering a raft of FX related questions, the pair has come off over 100pips.

– At the same time, the Euribor curve has reversed initial steepening, with the curve bull flattening amid speculation of easing by the Bank next month when the governing council is presented fresh macro projections. Consequently dragging Bunds back into firm positive territory.

– Looking elsewhere, in spite of growing expectations of more accommodative policy, which also resulted in further peripheral bond yield spread tightening, this sentiment has failed to filter through into European equity indices to the same degree.

– A number of economists at tier 1 banks have suggested that the Bank will wait until June to introduce any new programs. 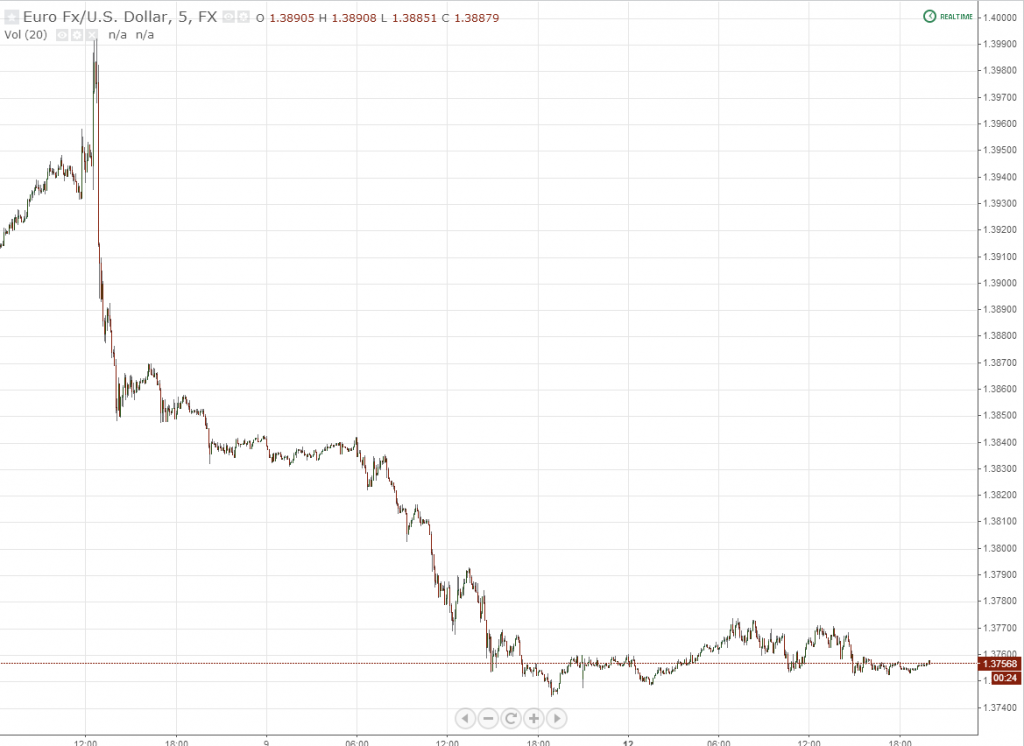 So how do you take advantage of a move like this?

Step 1, as I previously mentioned, is to understand what it is you are dealing with. And as usual, if you don't understand it, then (do I really need to say it?) don't touch it.

This is a shock announcement. The market didn't see it coming so there was no way to “price it in”. The market prices in information as it receives it. This is why many news events turn into complete duds when the actual number comes in line with the expected number. Anytime you have a surprise you get a shock in price, and if it has to do with interest rates, it is unidirectional, aggressive, and big.

Step 2 is, based on what we just discussed, knowing what a “normal” movement is for something like this. Every scheduled news event has one of these. For instance, US retail sales was just released today, which usually constitutes a +-20 pip move on USD/JPY, for the deviation that came out (it moved approximately 27 thus far, 23 following the spike). Obviously an announcement such as our main topic today is going to be much more substantial, which is where we really want to take note.

Step 3 is to find your pauses on the way down, and then trade into them.

What I will usually do is mark up my “reversal” areas first – these are the support lines that are going to generate the larger pullbacks, thus some of the better opportunity to get short. Most of the times these coincide with logical areas where people would take profits on a drive lower, as such: 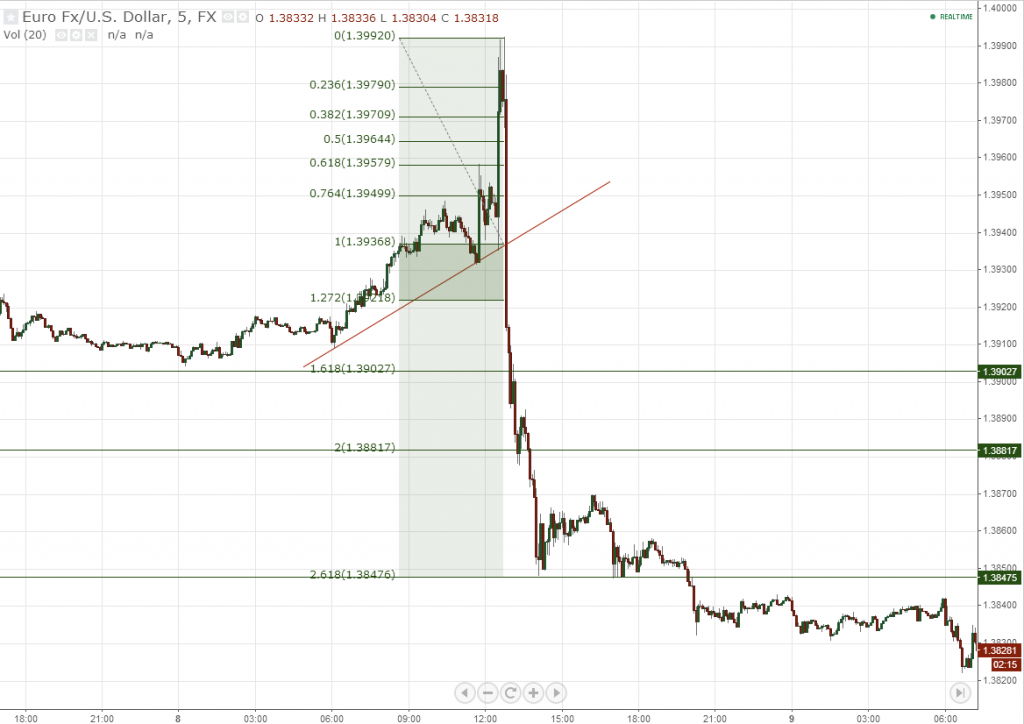 I am fairly certain that no one with an ounce of common sense would recommend fading these intraday, and on a move like this. End of story. There is just too much heat on the pair and you're spinning the wheel in terms of probability. Wait for the pullback and do the right thing.

In fast markets, people usually don't have too much time to do all that much so they tend to use:

2. Major lines already on their charts

Typically, the first of these is the go-to. Here the same chart, scaled down to a 1 minute. 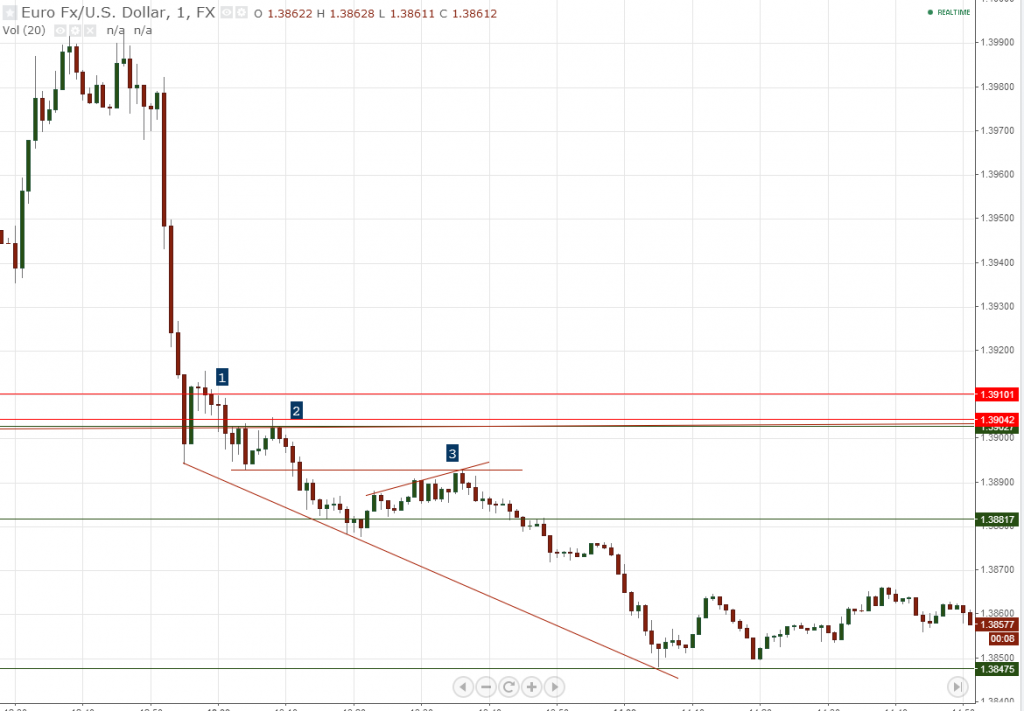 I also drew up a lower channel triple tap, demonstrating the support even in a heavy move such as this.

So not exactly quantum physics here, but rather a heightened level of awareness.

Trading does, most of the time boil down to nothing more heightened awareness and the ability to react on a real-time basis, based on what you see. The fundamental context is just as important as the price action itself, but no doubt takes time to become accustomed to what is considered “normal” on a movement such as this.

But when you see it, do it. There is simply no other way you will become comfortable trading anything without the action behind it. So for once, put the price action on the back burner because knowledge of a few high probability patterns is sometimes all it takes to get yourself locked in on a notable movement.

Steve W.
Since 2008, ParaCurve (formerly NBT) has been a provider of a wide range of articles geared towards a common sense approach to trading using fundamental market analysis in conjunction with globally identifiable technical levels. Steve is a 17 year trader, having formerly worked as a sell and buy side global macro analyst for several of the largest financial institutions in the world. You can follow us on Twitter or Facebook. Series and support at FXS Analytics.
Showing 6 comments
pingbacks / trackbacks 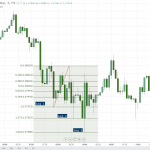 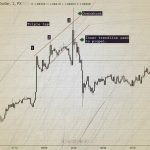