I had some friends come by to pay me a visit not too long ago and to much of their surprise, found my discretionary systems alongside another that runs strictly on basic velocity and acceleration principles. It's my little bit of Newtonian impetus that runs alongside my day to day business model that many of you know fairly well by now.

A while back, I had a very common issue with trading. In the past now, it is something with which most forex traders struggle and is far from unusual: the old issue of price running like a freight train, and never seeming to stop, despite any catalyst telling it to do otherwise.

I will admit that my velocity and acceleration system did indeed help me get over a period of destroying endless amounts of time, waiting for price to simple get to a level before I even had any opportunity to take another trade. If anything, it served as a simple wake-up call as to how often certain behaviors occur.  Since then, I have also identified several price patterns (continuation thrust, price symmetry principles) that speak strictly to the tone of expecting, at some point, stops getting blasted and price making a parabolic shove further.

There are 3 main, horrible traits that forex traders tend to exhibit that take homegrown money and turn it into Wall Street money. They are:

1. Letting losers run but snapping at profits in seconds,
2. Have a terrible time adapting to a newly formed trends, always seeking to chase price. And when they do, it is usually about to turn on them once again,
3. Don't exclude the possibility of a trend to keep moving or failing, and enter prematurely, or not soon enough.

These three things alone are the cause of most destruction in this business, with which end results are mostly related to trade management, not entry.

Quantifying a strategy has several benefits, but can also have major pitfalls. The worst pitfall, of course, is the system's inability to adapt to varying market conditions. Big system or small system, this is a very common flaw that is commonly improperly implemented. Those that thrive with quantified strategies do a great deal of continual optimization. I have seen quant strategies fall apart that trade literally, hundreds of millions of dollars, as I have seen them fall apart for small retail accounts. More about this issue is discussed below.

The better systems I have seen exploit cycles and momentum at all costs. They forget about bottom or top catching, and just simply trade with relative trends. They don't care about nailing price “to the pip” or anything of that matter. They go in, get what they need, and exit the market.

Additionally, they do not, by any means, mirror the behavior of common “loser” pitfalls. They manage trades well and provide good, risk-adjusted returns. Trading systems that mimic any of the three traits listed above are not trading systems. They are money vacuums.

The common Metatrader platform uses a technique called brute force in order to find the best input parameters for a given system. It essentially tests all potential variables for a system and does this over and over again until the outcome of all possible combinations are found within a specified range, and over a specified amount of data.

If you want to know why many trading systems lose money, it is for one, major, overlooked flaw that human nature accepts but systems do not:

There is no statistical mean for the performance of the system in all market environments. Just because one set of parameters is able to achieve certain results on sample data does not (and rarely does) mean that it will continue to do so in the future. This is a flaw of human nature, NOT the system. The system is doing exactly what you told it to do: curve fit the results by forcing a very specific set of parameters upon it.

In other words, a system must be able to perform within a wide range of parameters on out-of-sample data and over an extended period of time. Gaining positive results within a wide range allows the user to derive the mean performance and conclude whether or not it is satisfactory in terms of his or her target outcome.

Additionally, and more frightening, the creator of the system will force common trader pitfalls on the code, such as exercising extremely poor risk / reward. The math doesn't lie, nor does common sense. Risk adjusted returns are simply the best way to go.

How this Relates to Discretionary Trading

Now compare this to price pattern trading. We are told from the get-go that price patterns are going to occur and a certain result will follow afterwards. This, as I have explained many times in the past, is simply flawed logic. I made a short presentation a while back that explains why this is the case here: https://paracurve.com/2010/07/video-identifying-entry-points-within.html

Attached to every price pattern is the conventional wisdom that price will display certain characteristics after it occurs, which may or may not necessarily be the case. We have seen this is recent weeks with the notorious “gravestone doji” on EUR/USD, which essentially “signified” to go short, only to have that bar swallowed up and price trade higher. Or how about the recent head and shoulders pattern on EURUSD?  Wasn't price supposed to keep trading lower? By book definition: yes. In reality: NO.

This brings me to the ultimate point: management. As I mentioned earlier, trade management is perhaps the killer of all killers when it comes to anyone losing money in this business. One look at a retail order book will show the following:

As you can see, losers are left to wane, but compared to the open winners, the situation is horrendously bleak. If looking at this chart is not a wake -up call then I don't know what is. This, perhaps, is one of the strongest suits of a quantified strategy. Human intervention is traditionally the result of less patience and more illogical action.

Moreover, we have no statistical proof that these price patterns pay off over the long haul. The people demonstrating them rarely ever mention potential signs of defeat, which in truth, happens on a very consistent basis. Bottom line, they don't know, and are writing in an irresponsible and uneducated manner.

Tom has done a tremendous amount of automated testing on common price patterns, most of which busts conventional wisdom into pieces. You can find them all here: http://thepatternsite.com/rank.html

In regards to this example, and as I mentioned in the video linked above, trade management is key. A trader might short into a descending triangle, and another play the upside break long. Both might have positive results, depending on the desired target. The better risk / reward, however, comes with the upside breakout. So it all simply depends.

A properly devised trading system is going to see where the better returns are going to lie. These systems rarely trade in a manner that a discretionary forex trader would, simply due to the common human element that will likely never go away.

When it comes to tackling the pitfalls above, step 1 is simply seeing human nature for what it really is. Plain and simple, it makes us do simply illogical and stupid things when it comes to trade management. By shifting your focus on not resolving these “issues” or seeing them as a problem, but rather how to exploit them for opportunity, you are better able to start working in a more constructive manner.

As far as logistics are concerned, there are a number of different things that can help you out. I am a huge proponent of common sense in no way does anything listed above advise against it. Quant strategies can be helpful in simply “turning on the light bulb” by observing positive traits typicaly overlooked by discretionary traders. There is a great deal of information posted on this site by now which speaks to the tone of following simple, logical trading behavior and sifting out the noise, which fixed trading systems regularly do. 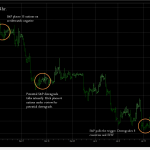 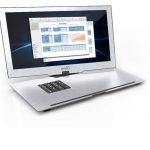 On The Go: Multiple MonitorsTrading Routine and Psychology