Rumor mill is in full operation again today regarding the fate of Papandreou. Facing heavy criticism for his call for the referendum, the BBC originally announced that an “unnamed source” explained that Papandreou will resign. As of now, we're looking at a possible temporary government for Greece, while EFSF hangs in the balance.  This, of course will likely change 5 minutes from now – it has been a never-ending flood of hearsay.

Presented below are a few possible scenarios regarding the fate of Papandreou, courtesy of Matina Stevis of the Wall Street Journal, a “Greek expat“.  She has been working  in Greece covering the events this week.

Thursday’s rapid developments in Greek politics have generated an avalanche of information, putting firmly in question everything from Prime Minister George Papandreou’s survival to the country’s euro membership.

A senior figure from the ruling Socialist party, Pasok, has told us that Mr. Papandreou’s resignation is the “likeliest scenario.”

The prime minister is currently in a cabinet meeting, and is due to address all his party’s MPs later. In these meetings, we are told he is most likely to step down as party leader and prime minister. But Mr. Papandreou could hang on, even though he appears unlikely to survive a planned confidence vote Friday.

So here are a few possible scenarios:

–First, Mr. Papandreou steps down and another Pasok minister, most likely Finance Minister Evangelos Venizelos, steps in. The Greek constitution would allow this for a time, but the new government would still need to move swiftly to election.

–Alternatively, someone in Pasok would lead negotiations to form a government of national unity–another interim solution that would probably result in elections by late this year or early next at the latest.

Opposition New Democracy party leader Antonis Samaras is now warming to the idea if an election date is set sometime in the immediate future, but only if Mr. Papandreou quits, say our sources. Dora Bakoyiannis, a former New Democracy minister and now leader of a new party, told us “there are many, many MPs across party lines who are fully prepared to support a proposal for the formation of a national unity government to guarantee the receipt of the new loan and Greece’s continued euro membership.

–Mr. Papandreou calls for snap elections. An election can be held three weeks after it’s called, so the country would go straight into a compact campaign season. Mr. Papandreou looks unlikely to lead his party into elections.

–Or Mr. Papandreou could ignore all calls for a resignation, and stay on to face a confidence vote in parliament late Friday. But he doesn’t look likely to survive it after fresh defections this morning. The vote of confidence cannot be called off because of parliamentary rules and will go on tomorrow, regardless of whether its outcome has any significance.

Finally, Mr. Papandreou could meet Greek President Karolos Papoulias and “return” his mandate. This means that the president then opens procedures to form a unity government by inviting leaders of all five parliamentary parties to take part. This is the strictly constitutional approach, and is unlikely to materialize.

In our view, Mr. Papandreou won’t survive as prime minister through Friday. Mr.Venizelos is likely to play a prominent role and Mr. Samaras will ask for immediate elections or consider an interim national unity government, and then elections. But one note of caution about Papandreou’s character: as amply illustrated by his shocker of a call for a referendum, he is stubborn and unpredictable. So he could well try to cling to power, but it doesn’t look like he has much of a chance. Whatever unfolds, it now appears unlikely that any referendum–whether on euro membership or the new bailout deal–will take place.”

Update: So not 5 minutes, but 45 later, referendum is scrapped and Papandreou maintains position.  One way to keep the entire planet on edge… 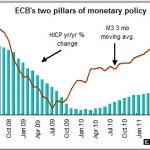 Current EUR/USD Levels: Where They Are and Why They’re ThereForex and Futures Commentary