There is a problem of which many of us are already aware:  so many people talk so much about trading systems, technical indicators, and basic fundamental data but all of the discussions really do is just one thing and that’s mask a core issue:

Certain trading means and methods are simply incompatible with the way the market really operates.

You will have one person that talks strictly about inflation all of the time, another that discusses China’s impact on the global economy, and yet another that tells you his indicator-based trading system is the best in the world.

Quality aside, these people are all nothing more than specialists, but as a trader you cannot be a specialist – you have to think globally. Global thinking entails a vast range of variables and doesn't simply stop at one window of a mansion that has hundreds.

In addition to thinking globally, you have to think in terms of human reactions to news and events, not simply “price” or “data” as we know it.   If forecasting price was as simple as taking data inputs and plugging them into a trading program you would have a lot more wealthy people out there.  But relationships and correlations shift constantly and the reason they do this is due to an unquantifiable emphasis injected into the market based on human reactions or emotions.

And this is where most people fail. Professional analysts clamor over each other on news shows, websites and all many of them are really doing is blindly looking at data and making a declaration that something is going to happen at a certain time, and for a certain reason. Theyre taking the data for face value and saying that price will respond based on a set release.

But many of them are consistently, not sometimes but consistently, missing one key component and that is the common hype that gets injected into this market as a result of sporadic purchases or sales driven by speculative cash flows and these…change..constantly. Hype is driven by events – or “fundamental news and data” to use the broad term.

Forecasting hype, or realizing the typical effect of these events should be your primary goal as a trader. You make an opinion about how the market will react and apply it accordingly. So it’s the reaction of market participants you’re forecasting or interested in, not the market itself.  LEARN these reactions.

Many analysts don’t come off this way because they are so involved in the data that they talk circles around you in terms of that data, until the end of the conversation you say to yourself “well they have to be right because I didn’t know what half those things they were talking about were”. Or if you did know what they were talking about, then you should simply disregard that analysis. That’s the point where all of that analysis becomes absolutely useless. Use it as a “heads up” on something you think you might need more knowledge of and throw away the rest.

Assuming you didn't know what the analyst was talking about, it’s not until several days or weeks later you pop open your charts and see that they were completely wrong and you start to question their authority. But then they get back on TV and start talking about more data you didn't know about and you say “oh ok must have just been that one time”, etc., and the cycle continues.

Some of you that work in the corporate world can relate to this. You will see a presentation put together that is packed with seemingly intelligent data only to watch the plan crash and burn because it was fundamentally incompatible with some underlying theme. This is common and examples are in literally every industry.

All of these people -– the ones that try to talk you in circles, whether they be analysts, “system” developers, some book authors, etc., all they’re really doing is “peacocking” you. They’re showing you their feathers hoping that in doing so you will either buy their materials or think that they’re otherwise incredibly awesome and tell your friends the same.

Getting peackocked is an easy thing to do in this business. Anytime you present someone with the opportunity of making money greed tends to become an underlying factor. Greed has several components, one of which tends to allow us to dismiss potentially detrimental information from our thought process. Give someone with the opportunity of making 10 million dollars and see how quickly that person dismisses many rational thoughts. Risk is paramount and there is no greater way to assume risk in this business than blindly following the actions of another person.

That being said, following the feathers of the peacock is an easy thing to do, particularly when you don’t know what you’re doing to begin with.[callout_right]Getting peackocked is an easy thing to do in this business. Anytime you present someone with the opportunity of making money greed tends to become an underlying factor. Greed has several components, one of which tends to allow us to dismiss potentially detrimental information from our thought process.[/callout_right]

Many startup traders follow a common path….the first instinct is to lean towards the investing section of their local bookstore and pick up a book with a ridiculous title about making money trading. But when you think about it, that material in many of these books can be just as sloppy if not more than half the stuff you find on the internet; it’s just presented in a different way: it is professionally edited. But the editor isn't an investing genius, he/she is just an editor. The content is all on the shoulders of the writer.

I am not saying you can’t trust anybody. You can listen to as much as you want but you have to be able to interpret it in your own manner.  As an example, those analysts that we were discussing earlier might have brought something up that actually serves relevance but in a different manner than they described. Only your experience is going to cut through the rough and determine whats valuable and what is not. An analyst might be wrong 9 out of 10 times but if they’re bringing to light one nugget that you had not previously considered then they might be worth an ear every now and again.

So where do you go if you want to change or simply start off?  Well, there are certain “basics” of any market. The first of which is all underlying fundamental data . That term, by the way, “fundamental data” we assume means anything that basically isn't technical in nature, or not relating to a chart. And we’re not just talking about economic data releases, we’re talking about ratings agency upgrades or downgrades, rhetoric by government officials, debt purchases and sales, geopolitical events, and so on.

Certain “weights” are applied to all of these items and contingent on the underlying context, some will certainly hold more weight than others. So where is an outline or a book that describes all of this? There isn’t one. Because it changes all of the time.

You can’t attach a rulebook to a dynamic entity. Trader reactions to these inputs are incredibly diverse. Adapting to them comes through nothing more than a tremendous amount of screentime and experience, calling bluffs or inefficiencies when you see them. The more you absorb yourself and most importantly witness and take take note of the reactions before during and after all of these events take place you will start to learn trade in line with them.

Getting distracted from this and starting to flip back to the common systems or indicators or face value interpretations of data to price is a very easy thing to do, so its crucial that you’re constantly monitoring this information with a professional news feed and making the black and white observations as to what happens and when. If you don’t have one, get one. You absolutely need one.

Traders get confused by simple, routine actions of the market. Just because a data release appears positive for the Euro doesn't mean that it is going to go up versus the Dollar. There are other factors at play and situations that arise that are more common than not. Your job is to get comfortable with these motions, and simply not get pulled into a rookie trap that could send your account spiraling downwards. It is not what you think would happen based on data to price or anything you have learned in the past, but what actually happens that counts.

The second thing we hear spoken about is simply technicals. I have written many articles here now where we’ve talked about using technicals simply as a guide. That’s all they really should be used for.

You can apply objective rules or “systems” to these levels but use them as references. Trade in line with flows based on underlying fundamental analysis, and use your technicals as references only. Trading usually becomes much much easier when you start to do this simply because you’re internalizing price movements in relation to current ongoings in the market….these are things things that truly matter most. Enhanced knowledge in any endeavor enhances the probability of a successful outcome. Broaden your scope and keep it simple: basic, real-time news and information and support and resistance as guides.  And of course, stay away from the peacocks….they'll peck your pockets clean. 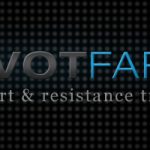 Farming For PivotsTrading Routine and Psychology