The ADP shock today blew a little magic dust on the currency markets and boosted USD into a solid 1.02% upclose. Going into the ADP number Euro was declining steadily after falling off of the top of a range of resistance parked up in the 1.3420's. We now have a series of open gaps from racing, falling price and stabilization has not been met just yet. This is true not only for the Euro but other major pairs, as well. Couple this with serious aggregate selling of the Swiss Franc and you have a market that went, by all definition, “bonkers” today.

So what about them horses?

While today’s ADP number for December was surprisingly strong, the reality is
that U.S. labour market remains in a state of disarray. The labour force gaps are
huge if not unprecedented. Fully 6.3 million Americans have been actively
looking for a job with no success for at least six months — a record, both in
absolute and relative terms, to the size of the workforce. One cannot help but
contemplate the looming social issues that will be involved if youth
unemployment rates at 25% and adult male jobless rates at 10% are sustained.
and further:

The U.S. ADP private payroll number was a record +297k in December. Surreal.
The market was looking for +100k. We never had a number remotely this strong
during the last economic cycle — last time we were close was in February 2006
when real GDP growth was 5.4% at an annual rate. Even the most bullish
forecast for Q4 is 4%, consensus is at 2.5%, so either we have something on our
hands that is much stronger than that or productivity is starting to sag. Or… this
number is BS. Take your pick.
The huge gain was centered in services (+270k) and especially in small (+120k)

and mid-sized (+123k) companies. I am thinking that this must be retail
oriented towards the better than expected holiday shopping season (financial
services actually posted a 6k decline and this sector represents a non-trivial 8%
chunk of total private payrolls). Goods-producing jobs rose a more moderate
27k, helped by a 23k gain in manufacturing, which seemed at odds with ISM
employment which actually dipped to a nine-month low.
We have U.S. payroll data back to 1940. There have been 111 times when
private service sector payrolls were +200k or more in a given month. Of those,
only 11 took place with the financial sector shedding jobs. In other words, for
the nonfarm payroll report to match what we saw in ADP would be a 1-in-10 event.

ADP is far from the tell-all of the U.S. employment picture, but what's the point? Friday is US non-farm payroll day and the consensus estimate is currently resting at 136K, with unemployment expected to drop 0.1% to 9.7%. December holiday retail sales tend to have positive derivatives, employment being one of them, hence the 136k expectation. While everyone loves to get excited by the private sector's input on the US economy, don't get too antsy just yet.

Last year was certainly not 2009 and if growth indications through the beginning of the year mean anything in terms of what to expect from this number than we are in for some positive results. On the same note, getting excited over a massive deviation shouldn't be done just yet. Last year, despite the different boat and while under moderate recovery, we had a -3k forecast clocking in at -85k. We have already seen employment numbers rolled into PPI and other indicators showing a decline in employment and we are far away from out of the hole. It is worth noting that last year's number, despite the disappointment, failed to support the Euro as Greek concerns flooded the news wires.

A disappointing result for the US could do some damage to the dollar, but the likelihood of European news triumphing in any way, shape or form is unlikely at this point. Despite positive inflation numbers being printed last week real rates versus the dollar remain rather steady. And let's not forget about Moody's. Speculation that yet another Greek downgrade is still on the platter. Conversely, a positive result could keep Euro chugging along it's ugly path, snapping the lower trendline and thus targeting the high 1.2700's conservatively and the mid 1.2500's over the longer haul based on symmetry references pointed out below.

Level references are below. Unquestionable the bigger picture on EUR has it already breaking a weekly supply line, backward testing it and pointing lower. EUR/USD has already poised a sharp decline alongside USD/CHF's dramatic climb yesterday, remotely supported by EUR/CHF buying. The Swiss are “frankly” pissed and refusing to let their exports fall into the dumpster. Technical levels are still holding for minor retracements, so some USD sellers of course remain. Today is not yesterday and the market is silently awaiting Friday's number. The ADP shock is plainly being called bluff by some traders on a very short term basis. 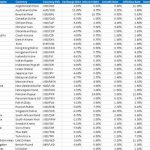 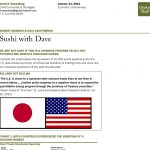 Japan and the US: Two Peas In A Pod?Forex and Futures Commentary