Below you'll find a list of data used to summarize the overall latest picture of where we will end the year in terms of rates and current status of last month/Q3 data for all others. Liquidity continues to dry up this week as portfolios make a final balancing act and positions/derivatives/systems, etc., are simply reset across the globe.

Consensus numbers for next year are generally flat to negative on EUR (1.3 avg.) positive for GBP, positive for commodity currencies (particularly AUD, followed by NZD and CAD), and the expectation that yen appreciation will once again resume, but not before a final dip. I've been busy this week flipping through every major bank's yearly forecasts and they all generally seem to be floating in the same ranges, with deviations around trading ranges more so than the actual 2011 year end result.

Bearish is not a term being discussed too often in regards to next year's forecast. For the most part, the larger banks have remained generally optimistic in terms of world equity markets (Emerging Markets included) remaining overall bid for 2011 following a frequently discussed correction (for currencies, resumption of moderate USD buying) in the early part of the year. EUR's dip has been discussed quite a bit, some of the more extreme forecasts saying it could extend into the 1.4000's before moving higher yet again, though anyone looking for such a decline tend to gravitate toward the 1.6000's.

From a pure technical perspective, weekly charts are showing a downward break of a prevailing demand line initially targeting the low 1.2500's with the 1.2440's being used as the telltale for any further decline. For upside movements, we're focused on the 1.3700's (backward demand line and 23.6% of last wave) getting blown to bits to confirm any further continuation. The past few months have been indeed very driven on the mood of of the market reacting to the latest happenings in the smaller nations of Europe, particularly Ireland's bank debacle and actions taken by the ECB to maintain stability.

Equity/bond and FX correlations that seemed so staunch during the early days of the recession have unraveled quite a bit this year, most notably USD/JPY which is now quite negative. Higher yielding currencies are the breadwinners among equity correlations, with commodity currencies (AUD, NZD and CAD) maintaining their tick. EUR and GBP have lost much of their track and are being examined on more of an ad hoc basis (primarily the Eurozone, with GBP being weighted by it), and greater deviations in have occurred.
The table below (in alphabetical order) shows where we stand in terms of YTD exchange rates (as of yesterday; today has seen minor shifting) and current interest rates, GDP growth, inflation rates and unemployment for our selected currencies.

Charts, sorted negative to positive in terms of value

And Now For Goldman….Forex and Futures Commentary 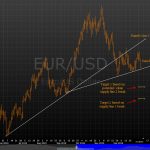 ADP Opens A Can Of What The…Forex and Futures Commentary