I was out of town at the end of last week on some personal business, so I missed Euro popping into new lows and breaching volatility levels unseen for some time. Coming back this week, I find myself spending a lot more time than usual pouring over data and seeing how to best position myself for the longer haul.

Yesterday I stayed up particularly late looking at possibilities ahead and we are simply seeing a very high degree of event driven price action where fear and uncertainty is ruling the court.

Euro dropped to a low of approximately -15% from the beginning of the year, and while it's great for exporters, its frankly scaring the junk out of many of officials. Many traders share the feeling, and the rumors are flying abnormally hard. Today alone:

It is starting to feel like I'm listening to a hoard of pompous teenage cheerleaders gossip in the corner about the direction of EUR/USD. Actually, if you ever worked in an investment bank, you will know that they're pretty much synonymous.

Here's what the crowd is saying today:

Intraday price action declared that we shouldn't be going short earlier today. Once 1.2233 got blown to bits, and then used on a retest, it was ‘sionara' from there. Below I highlighted in red the key areas I was looking at today, and in yellow, potential pullback zones.

When you have a range from 1.2144-1.2233 created like that, especially after a large drive lower, 2 possibilities present themselves:

1. Its a ‘boot; pattern or descending triangle, and price continues driving lower; usually hard and fast
2. A U shaped formation takes precedence, as was the case below

But regardless of today's activity, ‘overshoot' seems to be the macro word of the day and with such a mighty stretch in the past week Eur has to cool it's jets. That key 50% retracement I discussed yesterday is a big trigger point. I noted that buyers were congregating down there just in case anyone got any bright ideas, and now that we're retracing, the level remains on the radar.

When you have a major level such as this volatility is sure to ensue, and it is why I said to look for post-confirmation of any directional moves before making any rush judgement. In other words, we're not in an environment that favors quick fades at pinpoint levels with minimal drawdown. It has been a runny, fear-driven market that should remain volatile for some time.

It's the not-so new normal. 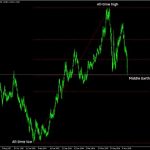