Cable : lower than expected GDP number yesterday caused the pound to spike lower. Pushes higher on the currency caused it to revisit the consolidation area ahead of the spike seen below.

The original spike base article can be found here: https://paracurve.com/2009/06/spike-base-pattern.html

I generally don't recommend trading these at such smaller timeframes but if the magnitude of the move down or up is great enough they will typically hold for a while, as was the case today.

GBP/USD 1min – Spike base at 1.6173; needed to go down to a 1 min chart for this one in order to see exactly where the spike base was, as it wasn't visible on anything else. 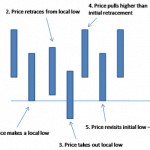 Quasimodo (Over and Under Pattern)Price Action Patterns 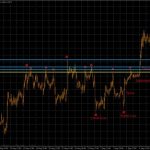