When I first started trading, I searched high and low for the solution of all solutions that would reap the most profits. Methods came and methods went, as I realized that most of them were great for Hollywood fantasy but not appropriate for my particular trading style or condition.

With some decent training by some of the best in the business, I started monitoring things that seemed to matter most – simple support and resistance levels, price patterns and intraday momentum. If fundamentals didn’t shock by breaking news, they typically followed a lot of these patterns, and I started to get very comfortable in picking the winners.

But as rosy as this all sounds, there was still an issue that was preventing me from truly propelling myself ahead. As usual, it had nothing to do with what I knew but rather an emotional response to a lot of what I experienced during the day.

For me, it was a lack of patience. My father used to call me “Evel Knievel” when I was a younger because I would take my bike and run things over with it, jump off of ramps, and do just about anything I could to get myself into trouble. I’m sure if any of my former employers knew this I wouldn’t have had a job, but regardless, I was hard-wired to take risks, make things happen and make them happen fast.

I would get into trades, and either pull out too quickly, and never let anything run. This is probably one of the biggest issues facing traders, so at least I was not alone, but it didn’t make my situation any better either. But I learned over time and with the help of others that there are some rather simple things to know that would raise awareness in situations such as this. Here’s the list:

1. Be honest with yourself

A lot of people don’t like being honest with themselves; we see it all the time. I was on the Upper East Side of NY one day when a woman ran right into me while I was standing in front of a counter at a book store browsing the shelves. Instead of apologizing, she said “Excuuuuuse me. Aren’t you going to say you’re sorry?”. “Sorry for what?”, I thought. “You running into me?” After a completely blank look from me she was on her way, but I couldn’t help but notice the judgment being made here.

So before you go out saying that your broker is scamming you, the free trading robot you downloaded from a forum isn’t working, your research provider is a sham, take a deep look at what the real root of your problems are.

Being honest with yourself is number one in moving ahead. Analyze yourself just as you would analyze your fundamental or technical data.

Once any insecurity woes have vanished, find out what your major problem is. Again, the best technique for this is to simply look at your trade activity and compare it to charts and run a series of “What If” scenarios. Look at your trades, and then look at your charts, and determine what would have happened if you did something slightly different.

Something is the key word here. That “something” is your major roadblock. Find out what it is.
If it’s technical, you need to brush up on your charting skills. Go back to whatever program you have previously used that simply worked, and hone up on your skills until you get back into action.

If its an emotional response, typically the following will help you conquer the negative:

3. Logic and understanding conquer all

Approaching your issue with simple logic and reasoning will allow you battle it head on and get over any humps standing in the way.

Somewhere out there, there is a solution to your problem, but most people are unfortunately too lazy to try to fix it, or they simply never make it a priority. By tackling your issue head on and through simple logic, reason, and understanding, your odds of a favorable outcome just shot up a considerable percent.

Whether it be a mathematical issue you need to solve or one of simple entry techniques, make sure you understand exactly what it is, and take logical steps to fix it.

If my experience on Wall Street has taught me anything, it’s that hard work and long hours are usually spent for good reason. At my last hedge fund job, the owner would work obsessively – through the weekends, through the nights, etc, and typically his ‘minions’ would do very much the same.

Most of you have read several to a ton of books on trading or other related topics, but how many of those books tell you that the real key element to success is experience? With the high volume of materials out there that tells you techniques and methods for conquering the market, but none of it can match simple screentime and watching price action in front of a monitor.

You’re likely to never fully understand why certain things happen vs. why they do not, but what you are likely to do is gain a very considerable competitive edge better than the majority, or at least enough to turn a profit.

I do actually believe that some people truly have an innate talent for understanding market action better than others, but the majority of what we do here is simply absorbed and learned through observation over time.

5. Experience does not equal brains

I know a lot of traders that obsess over their screens, but for some reason, they never quite “get it”. They're typically either listening to the wrong information or playing on wild ideas of their own.

When a trader has been trading for xx years, it’s hard to teach an old dog new tricks. They usually think they know it all, don’t need any help and that his or her time spent in front of charts alone makes them pure market masters. Not true.

Which brings me to my next point:

When any novice starts to do something and success is the result, the “know it all” mentality starts to shine. In trading, that’s usually about the equivalent of lighting a stick of dynamite.

Experienced or novice, an open mind is a key element to moving forward. Humbling yourself and saying “yes, I have a problem”, or “yes, there is something that needs to change here” could be all you need to get yourself on the right track. Leave the ego trips to the side.

7. Don’t try to be a perfectionist

Understanding that you will never hit that 100% win rate is about as crucial as anything else written here. Every business loses money sometimes, trading is no different.

Absolute perfection is, by the basic laws of nature, virtually unattainable. This is one point that a lot of people struggle with, and by true irony or cause, leads them in the completely opposite direction.

“No Pain, No Gain” could be the biggest cliché ever invented but its hard to argue against it when you’re trying to get over the curve of becoming a better trader. It’s talked about time and time again, but the fact remains that pain avoidance is far and wide the number one reason so many people get killed in this business.

If you’re walking home late one night and someone tries to mug you, you’re likely to run like mad, not go back and complement the mugger on the great job he just did taking your money. Humans are hard-wired to avoid pain, and any slight disruption will usually turn into action. But of course when you’re trading, we know the opposite response is needed.

When instincts turn into action, you usually end up with a negative number in your trading account – usually, that is. But again, when natural instincts are defended against through logic, reason and understanding, your situation starts to change.

Easier said than done, of course, but get it done. Make a roadmap or checklist of things you need to do to get over whatever it is that you are struggling with. Leave the news and charts to the side and make your list; it will be far more important than anything else you will do.

You might struggle in the beginning with nailing down your primary issue, but most people will know exactly what it is right away. Just get it done is the ultimate point here; approach your situation with a “tough love” mentality.

My only goal here is to raise awareness and perhaps shift your mind into a new or otherwise unconventional way of thinking about your trading plans. There is rarely any pure or absolute answer, just competitive edges gained through technical knowledge and knowledge of yourself. Understanding what drives you in life and adjoining it full circle with technical knowledge truly pays off in the end. 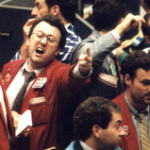 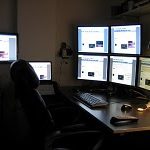 An Alternative Way to Add Multiple MonitorsTrading Routine and Psychology