We posted a trade yesterday for a GBP long, which got taken out rather quickly on news of the US Fed offering approximately double the amount to banks and the SPX, and other currency pairs made similar nasty declines. In line with our rules, we don’t take trades like this during news releases, but this was an unexpected news release and I wasn’t around to catch it and post an alert. Trading against the current trend during a release like this is risky in general and we don’t recommend it be done. GBP is now well above this mark and correcting as expected. For position traders, it would have worked out, but not for what we're looking for and our tight 40 pips stop loss. But in our best attempts to be fair and reasonable I updated the performance to reflect it. Even if its questionable, I'm not into cutting corners.

But regardless it’s a lesson to keep your ear to the news and listen in on anything changing on a regular basis. After this announcement we saw some pairs drop as much as 800 pips in 8 minutes, which as we all know are pretty monstrous moves.

-AUD dropped its interest rate -100bps to 6.00% – even more bad news for the carry trade. This is a huge cut with big implications and now rumors circulating about bigger cuts on other pairs. Expected was only ½ percentage point. These rumors could actually help support dollar weakness temporarily.

-SPX closed at 4%, after a 7% decline. London lost an astonishing 7.85%, and the rest of Europe beared a comparable 7.59% loss for the day. There are talks of coordinated efforts to cut interest rates by EUR, GBP and the US, in recognition of the problems. US Equity markets gained in late trading on this; would expect Europe and the UK to slow down losses on it as well, but not stop. Asia is down again about 3% so far today. So I’m still looking for sells of UJ and carry pairs. EJ hit that 135.00 target discussed yesterday right on the head today and bounced off of it.

-If you want to talk about correlation, take a look at these carry pairs today. Anything pegged to USD/JPY took a beyond-nasty hit today as the stock market declined. Again, the carry trade is a proxy for risk, in general. When investors don’t want risk, they sell their carry trades. If strong enough, it drags down the base pairs (AUD, etc).

-Oil declining as expected and moving closer to 84 target for reasons explained yesterday – this is going to keep tugging on Euro.

-Gold gained minor footing today as investors liquidating their equity assets into cash were buyers, seeing the commodity over the dollar as a safer investment. The demand we were talking about yesterday basically met on an intraday basis. AUD lost much of its gold correlation today based on the carry selloff, and given the current conditions, expecting it to take a while to snap back into place.

-The Dollar Index closed right AT 81.80, the 50% retracement discussed yesterday. Could start seeing a pullback here but right now still looking bullish. Next target is approximately 85.00.

I’m looking for short term plays until this volatility calms down. Still looking to sell UJ and carry pairs, and will go either way on EUR, GBP, CHF. Like I was saying yesterday, if there’s a time for them to correct its going to happen around here. But again, trend is still unmistakably down. If I hold onto anything, it will probably be dollar longs at favorable levels. Down to 1.3300 on EUR/USD Lots of technical levels built up in these areas in general. The interest rate situation could help support GBP, EUR, etc for the time being. 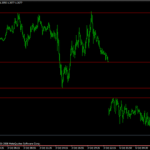 Points and Levels for 10/6/2008Forex and Futures Commentary 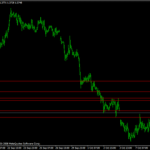 Ranges in Play: Points and Levels for 10/9/2008Forex and Futures Commentary