I could list a countless number of things that people typically take one look at and dismiss, simply because they don't understand it, nor take the time to do so. With touted order flows, this statement is very much true. In Forex, they're one of few things we have in terms of transparency, so of course some emphasis needs to be in place. I will say right out of the gate that many of my own initial interpretations were essentially busted through a period of long and drawn out observation, taking 1/2 hour every day to see the language accompanying these levels and how price reacted when they were actually hit. What you'll read below is a recap of my findings.

First off, a few general rules of thumb

I found that for currency pairs having higher liquidity (eg EUR/USD), things generally get a bit more convoluted, and I find myself resorting to more reversal confirmation tactics vs. direct top and bottom picking. To gauge liquidity, please refer to this presentation I posted several months back (slide 7). This mainly includes looking for topping or bottoming structures, such as triple taps, and then trading a diverged trendline break or pullback to 61.8 or 76% of the initial retracement (price bottom to first pullback after hitting the level).

I favored stops and option barriers for reversals, and trading the top of order blocks for fades and when they broke, continuation.

The longest-running currency fades occurred at times of day where reversals are common (NY open, very beginning of London, London close). The longest-running momentum plays (where ranges of demand or offers mentioned, and were violated) happened every other time.

I found myself favoring trades on EUR/JPY, AUD/USD and USD/JPY after a while, moreso than EUR/USD. The levels I found myself staying away from the most were simple areas where bids or offers were touted in a range (eg Offers 1.2530-1.2535).

Order flows are not “golden keys to the vault”. You still have to manage the trade properly and be patient, of course,  in terms of getting in the market and while your position matriculates. If you are a subscriber to lazy or sloppy trading than really nothing will help you until you fix that issue first.

Price action, like the type described above, is not only enormously helpful, but required in order to understand what is happening and when. No handouts and don't take anything for granted.

Below is a list of my findings, as they are stated, word for word. Today, we're not getting into a discussion of why any of this is happening, and for now it really shouldn't matter. Much of it would be theoretical anyway, and theory and practice are two different things. Theory is for higher education and guys trying to act like big shots. Practice is for making money.

Stops (one price provided eg “Stops 1.2720” : Indicate reversal on the FIRST HIT (very important). When “stops” are resting on their own, with no other flows in the area, these were by far the most reliable in terms of reversal. The average price descent or ascent beyond the touted level was only 4 pips (to take in the ask/bid) before it reversed. When price meandered directly above or below the level for some time, the exact opposite occurred, and price raced forward. On the SECOND hit, price raced forward.

Large stops: These are rare and don't come around too often, and I still feel as though I need more time looking into them. From what I saw, however, drawdown was slightly deeper than just “stops” being stated (around 5-10 pips) before a first-time hit reversal. And just as above, the second thrust blew the level wide open.

Bids (or offers) ahead of a level, stops below (or above): Same as above, reversal, although the average price descent or ascent beyond the touted level was greater than just stops resting on their own (anywhere from 8 to as much as 25 pips in rare circumstances). EUR/USD showed the most drawdown with these.

Bids (or offers) at the same level as stops (one price provided): Same again, reversal. Drawdown with these was very small, once again. Anywhere from 2-5 pips.

Option barrier: Like stops resting on their own, these also proved to be good reversal points when no other flows were mentioned in the area. Price passed the level by appx 5 pips (taking it out) before reversing.

Medium / Strong Offers or Demand (range provided eg Medium Offers 1.2520-15): These vary quite a bit. Price is entering a massive range of pending order flow while fighting intraday spot orders and the typical scenario that occurs is the following: price hits the top of the order block and pulls back roughly 10-12 pips, and then either 1. goes back into the order block, taking it out, or 2. maintains the reversal momentum. Full blown reversals usually occurred at the normal times of day for this type of activity, where price registers daily highs and lows. I found that once the base of the order block was violated, price took it out completely and used the bottom of it as support or resistance and kept moving forward.  Additionally, if there were more compelling targets shortly ahead, you tend to find these violated (either stops or option barriers).  Ultimately, these blocks can vary quite a bit in context and from pair to pair. Towards the end of trading sessions or at fixing events, they tend to fade the best, but trading into them at the right moments showed profitable outcomes as well (after stops triggered, etc.).

Option Barrier, Bids or offers on approach, stops (one price provided): reversal once again, though I witnessed the drawdown range vary from -3 to -10 pips.

Demand from Japanese importers (JPY Only, one price provided): drawdown of appx. 5-10 pips before reversal.

Image: All touted flows that got hit today on EUR/USD. 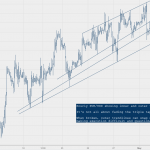 Inner Trendlines, And Why This Market Loves Them So MuchPrice Action Trading Strategy 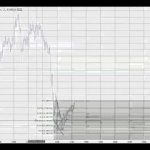