It wan't until yesterday I realized that this old pattern of mine had never made its way to this site, so here it is (as I promised one of our readers).

I generally don't attach much fanfare to this, and I use this mainly a “heads up” event only. Essentially price breaks out of a range, starts to trend, and that trend becomes more parabolic.

My primary use for this is to simply hold off on countertrend trades until it occurs, or in some instances, hold onto a trend trade to “let it bleed”. This is how longer term divergence gets created, and I want to see it before making any moves against underlying price action.

Sometimes it happens, sometimes it does not. But in the case of a countertrend move, I stay off the trigger until this comes into play.  My “book definition” (from the slide) is as follows:

“A parabolic trend becomes more parabolic, breaking out in the direction of the underlying trend. Traders that fail to respect base indications such as these tend to get caught in hard drives against current price action, “feeling” it is overbought/oversold and ignoring intraday clues that tell them otherwise.

Price continues to make multiple hits on diagonal or horizontal support and resistance and rejects it every time. A thrust ensues in the direction of the local underlying trend into either pure continuation or eventual failure, contingent on the macro trend.”

And the visual explanation….you can see how long ago these images were created, but the principle has not changed and is as it is:

Steve W.
Since 2008, ParaCurve (formerly NBT) has been a provider of a wide range of articles geared towards a common sense approach to trading using fundamental market analysis in conjunction with globally identifiable technical levels. Steve is a 17 year trader, having formerly worked as a sell and buy side global macro analyst for several of the largest financial institutions in the world. You can follow us on Twitter or Facebook. Series and support at FXS Analytics.
Showing 10 comments 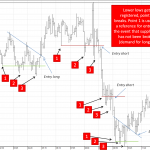 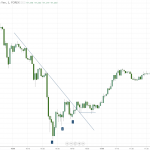