The hype surrounding the latest version of the ECB's LTRO is certainly not like the last. There was a muted output in terms of reactions across currencies, and now we face everything the mainstream media has to throw at us in terms of this event. More people are listening, thus a higher residual action (le volatility) is expected.

There have been reams of articles discussing how much is potentially being distributed, effects on both a long-term and short-term scale, etc., so I'll hold my breath and provide you with a few links below. One way or the other this is not your college financial aid package and essentialy emulates quantitative easing in terms of its final desired outcome.

With the typical reaction of any form of government aid / bailout, risk-on has been the traditional trade. Expecting this, the market has continued to bid up the euro essentially “buying the rumor” ahead of the release.

There is little clarity in terms of how this will play out, simply stated, other than the mere fact that most analysts are viewing it as an immediate risk-on event (a good “safety” bet – if the market ticks 5 pips higher they'll all be saying they were right). Over the course of time this traditionally tapers off and corrects. So needless to say, another jerk higher in price wouldn't be much of a surprise from this one.  The market has been bidding straight through New York / Asia and awaiting it's stimulus.

After LTRO1, you'll remember, it was actually “risk off” until those bonds (mentioned below) corrected 2 weeks later and hopes for peripherals started to resurrect yet again. Intraday, it was “risk-on” for minutes prior to downfall.

And the bearish case for LTRO:

If LTRO mimics anything like that of the reaction received as a result of QE1 and QE2 by the Fed, the reverse should (in a black and white perspective) put selling pressure on the Euro. During both phases of quantitative easing, riskier assets took the helm and the dollar effectively got crushed (EUR/USD, after the initial rally of QE1 then sold off as a result of deteriorating conditions in Greece and other peripherals). One would think that, “well, should the same occur in a European version of QE, where the Euro is the one that actually gets sold?”….this, of course, all risk on / off correlations aside.

And about that risk on / off correlation – the lower rates get for the EU, the less attractive buying into it should effectively become. This is indeed another form of “side pocket easing”. After LTRO 1 we saw 2 weeks of higher yields in Italian and Spanish bonds before significant downfall.

Second, when is the hell are investors going to indeed realize that Greece's (and other peripheral nations') troubles really aren't so good after all? There is really no need elaborate here as the clock is ticking but the gist is that several of Europe's nations are still deeply suffering while generally good news is coming from it's counterparts around the globe.

Steve W.
Since 2008, ParaCurve (formerly NBT) has been a provider of a wide range of articles geared towards a common sense approach to trading using fundamental market analysis in conjunction with globally identifiable technical levels. Steve is a 17 year trader, having formerly worked as a sell and buy side global macro analyst for several of the largest financial institutions in the world. You can follow us on Twitter or Facebook. Series and support at FXS Analytics.
Comments
pingbacks / trackbacks 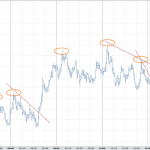 And As A Friendly Reminder, This Is What EUR/USD Did During LTRO1Price Action Trading Strategy