It’s oh so easy to focus on the negative because it is, after all, oftentimes a lot more interesting than the positive. The day started off great……good news and positive outlook, the EU rolling up their sleeves and getting the job done. The top two headlines this morning were:

• EU Leaders agree on a “Debt Crisis Tool” to maintain headway with the ECB saying it will nearly double its capital base in order to do so (root cause bad of course, but EU positive on the notion of “good news”, which has tended to fade more rapidly in recent months – there is nothing new about bailouts anymore)
• German business confidence rose to a December record (EU positive)

….And then Moody’s comes along (who as the name suggests tends to get people “moody” and apologies for the terrible joke) slapping Ireland with a 5 notch downgrade – Aa2 to Baa1 – sill not junk status but right on the border (EU negative).

For all of the good things that might come, and taking into consideration the mere size and contribution of Ireland in regards to the rest of the EU, the shock lead on by what could be considered somewhat expected news (Moody’s downgrade) sank EUR/USD back down through yesterday’s lows.

We all saw the downgrade coming, but reality realization of this magnitude is perhaps another issue. Moody’s, who attempts to best “objectively” measure their ratings laid it on thick today, and the U.S. / completion of the London session just drove in a hard nail through the 1.3180 area, bringing EUR/USD down to the 1.3136 support zone.
In terms of this retracement level, a while back some of you might remember me discussing the disqualification of random peaks in price surrounding an otherwise flat zone. If not, here is a very good example of it. We just punched through the 1.3180 area, triggering momentum sells, into this “plain” where we are getting a “cool-off” retrace. 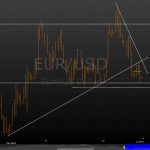 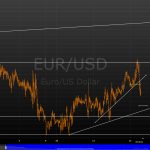