EUR/USD spikes mid-London, hits its head on the major downward sloping trendline at 1.2870 and starts to aggressively fade. CPI numbers, in line as always. Friday's German GDP catching up with traders after the worldwide risk averse-driven sell-off last week. Consolidation across the board and punchy moves like this coming as no surprise after the magnitude of recent shoves to the downside. Trend is still down but keep your eye on this trendline that just got hit in case other plans are on the agenda.

This was our short term target to the upside but loftier targets are, once again, at the 1.2990 area, the 23.6% retracement of the daily trend. The large base (8/12 high) circa 1.2930 also worth noting. Of course, we need a confirmed break of what just got hit (and is currently fading) in order to consider that though….macro trend is of course still down.

Cable has also hit its major daily trendline during Asian trading today and registered a major bounce after briefly poking its head through, finding backward support from the largely discussed 1.5550 area. 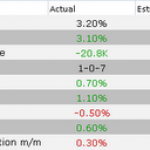 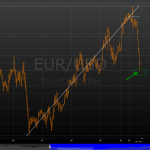