In order to set a reasonable profit target, we need to know the following about our trade:

Naturally, the trades that tend to pay out the most are in the direction of the overall trend and reversal trades. Countertrend trades should be used for scalping alone and of course pay less. It is important to identify which type of trade you are in to gauge its ability to continue and set reasonable profit targets.

With any of the 3 types of trades, obstacles are our major concern. The trade will continue as long as obstacles continue to get broken. There are two major types of obstacles, both in line with our reasons for entering trades:

These obstacles also serve as my profit targets on any given trade. When determining a viable profit target I consider the following:

As previously discussed, profit targets should be dynamic, meaning they are not a fixed pip amount. Defining both a stop loss and profit target based on a fixed pip amount is inefficient because it ignores any dynamics of the market, and can hinder our risk/reward ratio. Again the market does not “think” like we do, in terms of fixed numbers, and instead reacts to key price areas, as we have outlined in previous articles.

By examining the type of trade I am taking (countertrend, trend following, or reversal), I already have a general idea of the profit target I would like to see hit. If it’s a countertrend scalp, I might be looking for only +50 pips, whereas if it’s a trend continuation trade I look for significantly more, possibly in the range of +150 pips to +250 pips, dependent on the strength of opposing market obstacles. Other traders might reach for more pips in these situations by looking at bigger timeframes, but these numbers are in line with my personal style and comfort level of trading.

I mark up the most significant price barriers counter to my trade and find a reasonable level at which price has the ability to reach. In the example below, a short trade was taken at 1.3280. This is a reversal trade, and a bigger payout is expected. Due to the price action on the last move leading up to the short, few obstacles lay in the path of the trade. The first obstacle comes in the form of a diagonal trendline, which price reacted to by bouncing approximately 100 pips. A shorter term trader could have taken profits at this alone for a healthy payout, or even faded the trendline for a countertrend trade. When the trendline was eventually broken, price charged through the next obstacle at 1.2975, which was former resistance on the last move leading up. You can even see on the hourly chart posted here that this level was actually used as resistance again on the move down, while price was ‘breathing’ from its move through the level. Eventually, the final target was hit at 1.2815, or the major low made as price was moving upwards. These lows, if build up enough, tend to be very strong areas, and I fade them quite frequently. It was perhaps the strongest level of support for my trade, hence, the ultimate target.

Scaling out of positions

It is important to state from the beginning that it is always better to let positions run for full profit. Only if intraday conditions change severely, and leave a high level of doubt that your profit target will not get hit, should you consider taking partial profits.

There was a time when I would regularly take partial profits when certain market obstacles were hit, though I soon began to realize that this practice was inefficient over the long run. The problem with this technique is that my risk/reward became skewed, and I was severely limiting myself in terms of upside potential. Most of my profit targets would eventually get hit, and nullify any of my reasoning for “protecting” my position by taking partial profits.

If I felt there was sufficient risk and that upside was uncertain, and I wanted to scale out of the position in halves (1/2 now 1/2 at final target), my first level of doing this would be at +80 pips. The reason for this is simple. I am allowing myself no less than 1:1 risk/reward, with the potential for further gain if the trade works out and hits the full profit target. This basic model assumes that I have a success rate of over 50% on all of my trades in order to turn a profit. By closing the rest of the position at +120 pips, my final risk/reward ratio comes out to 1:2.5. Here’s the basic math, assuming 5 contracts are traded:

Alternatively, closing the full position at +80 pips would secure 1:2 risk/reward

Stop Loss (Risk) = -40 pips * 5 contracts = $-2,000
Take Profit = 80 pips * 5 contracts = $4,000
There are many other variations of doing this, and the math is quite simple, but this is just one basic example of how to scale out of a trade while maintaining a proper risk/reward ratio. Ultimately, the most important factor to realize is that your risk/reward is not skewed or unaligned with your trading history and ability to pull in the number of pips you are targeting per trade. 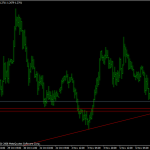