Our strategy is simple yet requires thoughtful analytics like any other system. We enter trades only at key levels of support and resistance, sometimes employing the use of diagonal trendlines and Fibonacci retracements. But regardless of the situation, strong horizontal support or resistance must be in present to enter the trade. Simply stated, we define a level where we believe price will react from, and wait for price to reach that level and enter. It sounds easy because it is, but like anything else there are other factors that come into play that significantly enhance your win rate.

Because the entire premise of this strategy is based on horizontal support and resistance, we first need to know how to define these levels:

Support and resistance occurs when the current price bounces off of a level, or area that has been historically used as a market turning point. These levels can have a range anywhere from 1 to 50 or more pips, depending on the timeframe being looked at. The majority of support and resistance levels we use for daytrading have a range of usually 1 to 20 pips, most commonly to the lower side.

We make our money by placing buy or sell orders at these heavy support and resistance levels. We have many ways of discerning which levels lead to much higher probability of success than others, and have rules implemented for avoiding trades in which there is a strong possibility that the level will be broken.

As an example, below is a 4hr chart of EUR/USD. Historically, the 1.5484 price level has acted as both support and resistance on many occasions. Fading (trading against) this level would have provided hundreds of pips on this chart alone. Knowing when it is okay to fade the level and when it is not is something we will discuss a little later, as it is an extremely important issue. 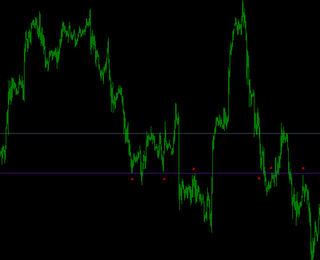 Using these levels and these levels alone, very high probability trades can be found each and every day. Some of these levels are good for only 10 or 15 pips, others have the potential to completely turn the market and run for thousands of pips. Making 80-hundreds of pips daily is not an unreasonable assumption for using these levels, once experience and confidence has grown. Also, we speak from experience when we say that unarguably there are other factors involved in trading these levels, and we will explain them in later articles.

ParaCurve is free and has been since 2008. Help us out and rate our content!